Nothing could stop these heroes from finishing America’s oldest race. 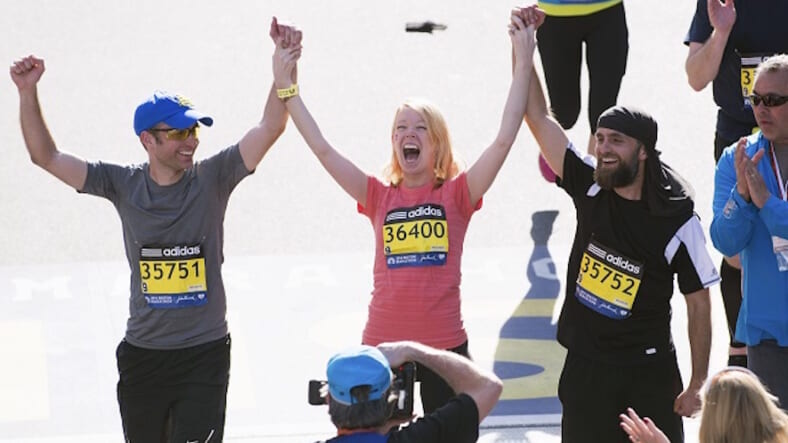 Patrick Downes and Adrianne Haslet-Davis didn’t know each other in 2013 when they were both injured in the Boston Marathon bombing. But three years later they return to the race, inextricably linked. On Monday morning, they became the first two people who lost limbs in the bombing to run the race, each with a blade where one of their legs had been.

Downes, who lost his left leg below the knee, first started running on a prosthetic blade in February 2015. After working his way through shorter races, he began the uphill battle of training for the marathon. “I feel like I’m celebrating the body that I have left, and it feels spiritual,” he told the Boston Globe.

Remarkably, Downes didn’t let his injuries keep him from the 2014 or 2015 races. He hand cycled both of them. But his plan to run in 2016 has made him a minor celebrity in Boston. On Sunday, he threw out the first pitch at the Red Sox game, firing a perfect strike into David Ortiz.

Adrianne Haslet-Davis also had a marathon bid today and she’s also running on one leg and one blade. A professional ballroom dancer, Haslet has never run the race before—she was injured while watching in 2013. She did, however, dance across the finish line last year.

Haslet first got her blade to get back into dancing, not to run, but when foxtrotting with it proved too difficult she broke out her sneakers. “I realized it was very difficult to use and I love a good challenge. I kept running to overcome that challenge, not thinking it would turn into what it did— a love affair of running and the decision to do 26.2,” she told Glamour.