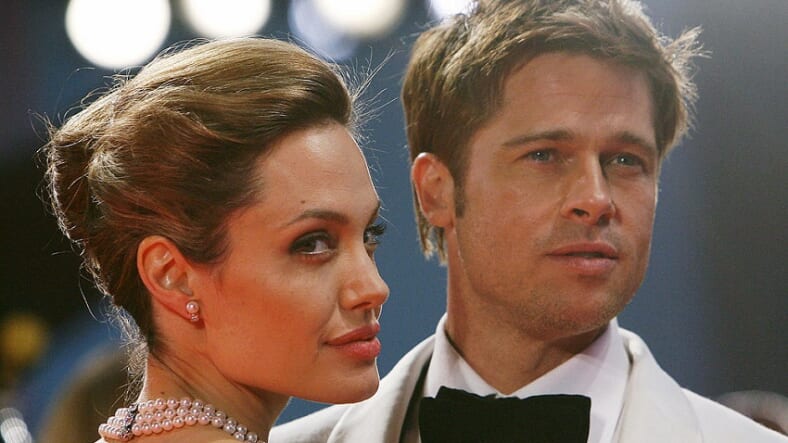 Divorce is generally agreed to be one of the shittiest human experiences, ever. In a new interview with GQ, Brad Pitt made it clear that even for stars like him and his ex Angelina Jolie, that rule holds true. But, according to Pitt, there have been some good outcomes as well.

For one thing, Pitt used alcohol to cope with the stresses of marriage and family, but he’s been sober for six months now. Events like a divorce, says Pitt are “a huge generator for change.”

“And I’m quite grateful for it,” he continues, “But me, personally, I can’t remember a day since I got out of college when I wasn’t boozing or had a spliff, or something. Something. And you realize that a lot of it is, um—cigarettes, you know, pacifiers.”

Pitt says he knocked off the weed once he was a family man. He continued drinking, though, and he “was boozing too much. It’s just become a problem. And I’m really happy it’s been half a year now, which is bittersweet, but I’ve got my feelings in my fingertips again. I think that’s part of the human challenge: You either deny them all of your life or you answer them and evolve.”

Based on his interview, however, it seems he’s dealing in moderation, not going total cold turkey, exactly. “I mean, we have a winery,” he tells GQ, “I enjoy wine very, very much, but I just ran it to the ground. I had to step away for a minute. And truthfully I could drink a Russian under the table with his own vodka. I was a professional. I was good.”

We believe him, and we’re not going to ask whether being married to one of the world’s most beautiful women—someone who has a rep for being very intense—had any influence over his desire to cuddle up with the bottle sometimes. It’s just good to know the Pitt-Jolies are apparently working it all out now, especially after Child Services even got involved at one point. After all, to Pitt, divorce can be “an investment in vitriolic hatred,” and he refuses to give into that.

Fortunately, he says that Jolie agrees. Divorce is “just very, very jarring for the kids,” says Pitt, “to suddenly have their family ripped apart.”

So true. And if Brad Pitt can get through it and come back swinging, maybe others can, too—though we’ve got a feeling his rebound game is a helluva lot smoother than ours.