Be the One Who Knocks. 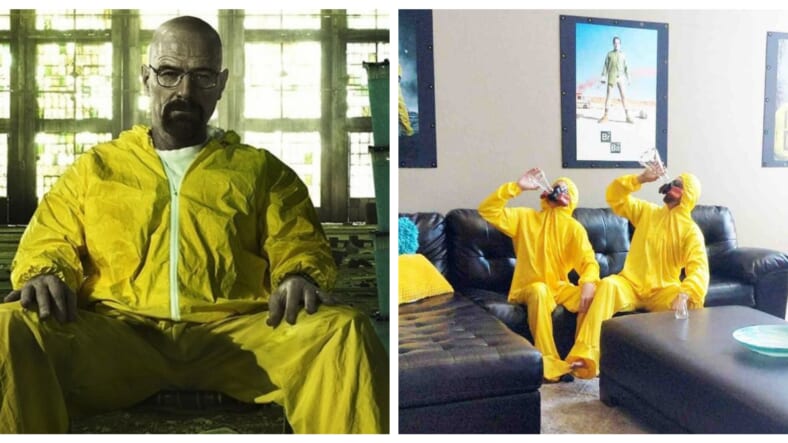 If the revelation that Netflix is releasing El Camino: A Breaking Bad Movie, has you stoked, here’s an opportunity for you to do your own Breaking Bad cosplay in an actual house used in Season 5, Episode 3 of the AMC drama.

It’s now available for rent on Airbnb from owners who are totally clear on the large 4-bedroom 3-bath home’s legacy and potential appeal.

Here’s more from the Airbnb listing:

This house is about 3600 sqft. There are enough beds here to sleep 17 people. One fold-out bed in the Great Room and the other beds are all in bedrooms. The kids bunkbeds are solid and can support up to 200 lbs and each mattress has a mattress protector so accidents aren’t disasters. In the kids room, there are also 2 infant pack n play beds.Make sure to don the hazmat suits and Vamanos Pest uniforms for fun and pictures during your stay here! A popular activity is to find specific scenes in Season 5 Episode 3, put on the appropriate clothes, match camera angles perfectly, and take pictures making it look like YOU are a part of the show! Create memories that can last a lifetime.

The house was featured in an episode in which Walt and Jesse used a fake pest control service (Vamanos!) to disguise their operation, tenting the house as if it was being fumigated.

For $259 a night—at this writing, the price could always go up—you get plenty of room and carefully-chosen Breaking Bad-themed decor to really enhance the atmosphere.

That’s not all though—it’s just a nice location in general. It’s in northwest Albuquerque and there’s plenty of shopping and other amenities 10-15 minutes away. As you can see when you check out the photos on Airbnb, many iconic Breaking Bad locations are just 15-30 minutes away, including Walter White’s home.

Just don’t go throwing pizzas on the roof there, the owners don’t like it.

You also get amazing views of the Sandia Mountains and the amazing sunsets so characteristic of the Southwest. That and the owners say in their Airbnb listing that “some mornings you can see hot air balloons which are a staple of the Albuquerque culture.”

Ideally, you’d probably want to snatch this place to hold a party for the October 11 Netflix premiere of El Camino: A Breaking Bad Movie, but it’s already booked for the 11th through the 13th.