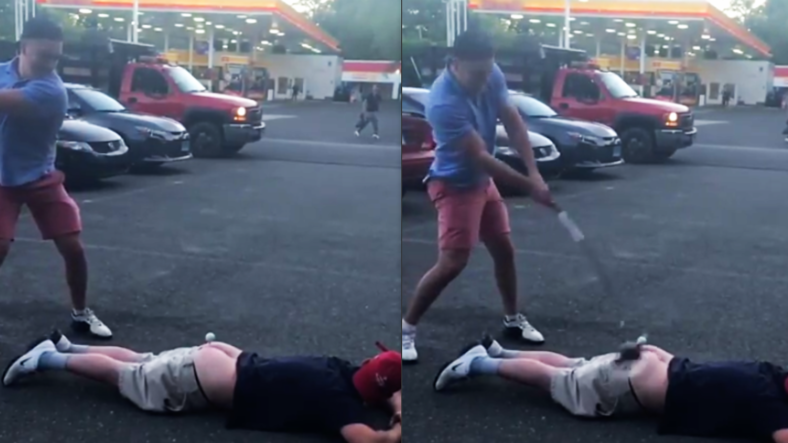 Scroll to the right to see the aftermath (@soyyah)

Looks like Tiger Woods wasn’t the only golfer who had a tremendously bad idea recently.

Take these two bros in the video above. Who knows what compelled this dude to tee up a golf ball between his buddy’s bare butt cheeks and take a massive swing, but it sure is fun to watch.

Unfortunately for him—but fortunately for us—this guy’s bare butt caught the brunt of his pal’s heroic swing. Dude’s right cheek took a hell of a wallop and is basically covered with a wicked bruise in the “after” pic below. I’d even go so far as to call this gloriously purple beauty a full-on hematoma.

The clip comes from the demented bro-hive behind the Total Frat Move Instagram page, an online destination brimming with boneheaded stunts, plenty of collegiate debauchery, and yes, some scantily-clad women to boot.

Just watch this epic beer pong dunk. Don’t you wish you had these skills back in the day?

The beer pong equivalent of dunking from the free throw line

And then there’s this guy who might actually be dead.

Did we mention the babes?