Meow it can be told. 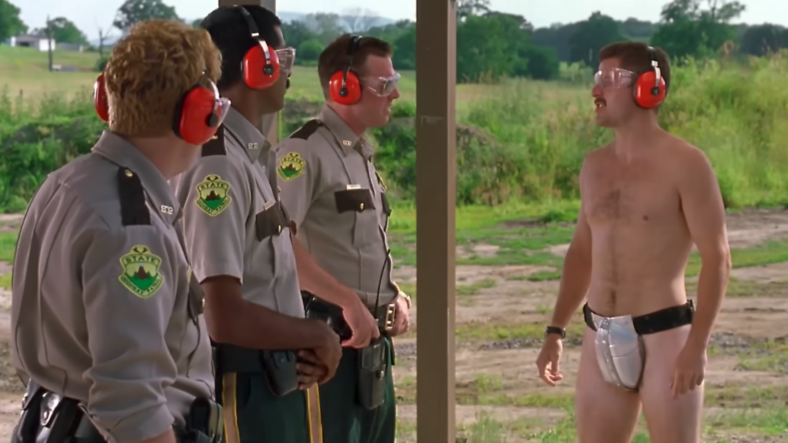 Vermont’s most dysfunctional squad of Staties will make their triumphant return to the silver screen next week in Super Troopers 2.

As months of anticipation culminate on—you guessed it—4/20, the geniuses of Broken Lizard take a look back at their favorite scenes from the classic cult comedy that started it all in the above video featured exclusively on Maxim.

Kevin Heffernan (Farva) offered a little Super Troopers trivia with his pick, as he explains that his parents were written into a traffic stop scene at their request.

“It was a pleasure to go up to your parents and call them ‘chicken fuckers’ over and over again,” Heffernan says.

This unforgettable moment was shot within eyesight of a real maximum security prison. The tenants weren’t shy about giving Steve Lemme (Mac) all kinds of shit as he donned the hilariously absurd bulletproof jockstrap.

“They would just scream all kinds of hideous things at me,” Lemme recalls. “So that was fun.”

Watching a nude Heffernan get coated in powdered sugar and sprayed down with an underpowered garden hose was fun for everyone, including Jay Chandrasekhar (Thorny).

“That was initially an homage to [Rambo] First Blood,” Chandrasekhar explains. “It was fun for me because my friend, Kevin, is going to be nude.”

Dedication to one’s art is important, which is why Erik Stolhanske (Rabbit) and Chandrasekhar decided to imbibe bottles of real maple syrup.

“The prop master tried to put ice tea in it, but when we looked at playback it didn’t look thick enough,” Stolhanske says. “I ended chugging about three full bottles of maple syrup.”

Who needs a stunt double? Heffernan sure didn’t when he hopped the counter and wailed on the Dimpus Burger boy.

“One take Charlie,” Heffernan says. “I jump the counter and I beat the crap out of him.”

See what other side-splitting moments the gang has in store when ‘Super Troopers 2’ hits theaters on April 20.