‘The Brothers Grimsby’ Really Wants to Piss You Off, and It Probably Will

Sacha Baron Cohen’s latest movie is not good, but that doesn’t mean it didn’t make me laugh. 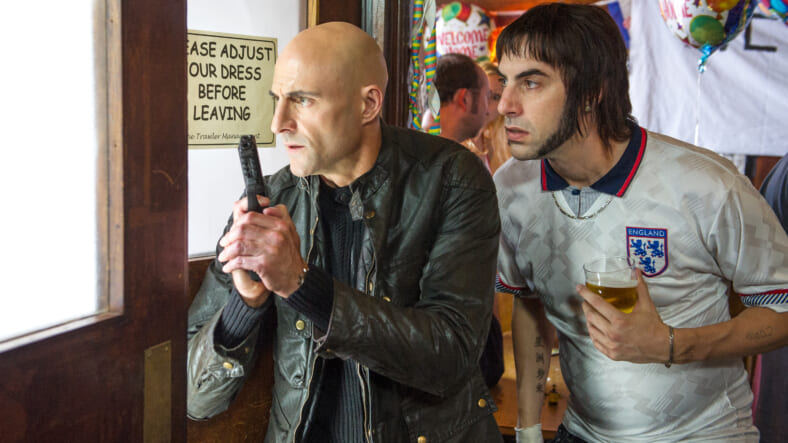 My approach to reviewing comedies is simple — plot is secondary, and all that really counts is “did it make me laugh?” By that metric, The Brothers Grimsby is successful.

Comedy is so inherently subjective that something I find hilarious may be stupid to somebody else, so take this all with a large grain of salt and consider your own personal taste. Also, if you don’t want any of the movie’s most salacious gags spoiled, skip the next paragraph.

If an AIDS-ridden Daniel Radcliffe spilling his infected blood into Donald Trump’s open mouth sounds like your idea of a fun Friday night at the movies, by all means, buy your ticket for The Brothers Grimsby this instant. If the sight of Sacha Baron Cohen’s prolapsed anus, or a gigantic, jizzing elephant cock, tickles your funny bone, get your ass in a theater ASAP.

The Brothers Grimsby is absolutely that repugnant and offensive, which is all it’s trying to achieve. As with every other Cohen project, all the jokes here are manufactured to push buttons and elicit an intense response. Each comedic set-piece is seemingly more disgusting and upsetting than the last, and while I personally didn’t find any of the aforementioned sequences to be particularly funny, it’s the throwaway one-liners surrounding them made me howl in spite of myself. But what it’s even about?

The Brother Grimsby opens with soccer hooligan Nobby Butcher (Cohen) drinking profusely, fucking publicly, and watching a lot of soccer (football, if you’re reading this anywhere that’s not America). Even though he’s happy with his loving wife (Rebel Wilson) and gaggle of kids, there’s still a gaping hole in his life left by his estranged brother, whom he hasn’t seen since their childhood.

It turns out Nobby’s brother Sebastian (the incomparable Mark Strong) is now a secret agent, and when Nobby somehow gets word that he will be in town on assignment, he shows up, and manages to botch the entire thing so badly that he and Sebastian are sent on the run.

Nobody is watching this movie for plot, so it’s no big deal that all the film’s exposition just so happens to fall straight out of Isla Fischer’s mouth, or that the entire trajectory of its “story” is reminiscent of countless other buddy action-comedies. The plot is merely a vehicle to get from one abhorrent gag to the next, and as such, it gets the job done. The humor is so rapid-fire and scattered that if the ball-sucking joke didn’t land, no worries, you’re only seconds away from a harmless slapstick routine.

Grimsby tries a bit too hard at times to provide some backstory, and all the flashback sequences to flesh out the brothers’ complex relationship mostly fall flat. The film is short and sweet, but those scenes bog it down and interrupt the otherwise relentless, joke-a-minute flow. But the movie gets a boost from having a quasi high-profile, action-heavy filmmaker like Louis Leterrier (The Transporter, The Incredible Hulk, Now You See Me) in the director’s seat. The frenetic action scenes are chaotic and move fast, and there’s some fun, violent POV camerawork in the mix.

Sacha Baron Cohen will likely never make anything with the same cultural impact as Borat again, but Brothers Grimsby is certainly a step up from the borderline unwatchable The Dictator. It’s a shame that Cohen’s best characters all rely on the element of surprise and misdirection, as they’re all too recognizable now to exploit any further. Grimsby could easily be a potential franchise starter, but given just how crass the film is and the lack of a wacky central Cohen character doing cinéma vérité style bits, it likely won’t earn the box office receipts necessary to ensure that. And that’s fine.

At 83 minutes (with credits), The Brothers Grimsby is just the right length to not become intolerable. Its stupidity cannot be overstated, but for every horrible, in-poor-taste joke, there’s another genuinely funny one to make up for it. If you’re a Sacha Baron Cohen fan, see this movie. Otherwise, watch anything else.

The Brothers Grimsby will be released on March 11th, 2016.