But who do you think would win? 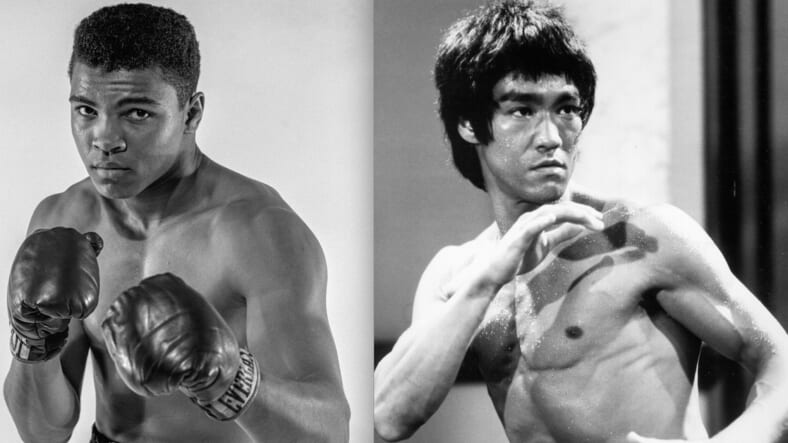 It is a question that countless drunks have argued at a bar: who would win in a fight, Bruce Lee or the Muhammad Ali?

At 6-foot-3 and 210 pounds in his prime, Ali looked like he could easily clobber the 5-foot-7, 145-pound martial artist master with a single heavyweight punch. But what Lee lacked in brute force, he made up for in otherworldly speed and skill.

Even so, Mass Appeal points out that in his 1989 book The Making of Enter the Dragon, director Robert Clouse revealed that mere sight of “The Greatest” made Lee’s blood run cold:

Another time Yeung, aka (Bolo) went to see Bruce at Golden Harvest Studios. Bruce was screening a Cassius Clay (Muhammad Ali) documentary. Ali was world heavyweight champion at the time and Bruce saw him as the greatest fighter of them all. The documentary showed Ali in several of his fights. Bruce set up a wide full-length mirror to reflect Ali’s image from the screen. Bruce was looking into the mirror, moving along with Ali.Bruce’s right hand followed Ali’s right hand, Ali’s left foot followed Bruce’s left foot. Bruce was fighting in Ali’s shoes. “Everybody says I must fight Ali some day.” Bruce said, “I’m studying every move he makes. I’m getting to know how he thinks and moves.” Bruce knew he could never win a fight against Ali “Look at my hand,” he said. “That’s a little Chinese hand. He’d kill me.

So it looks like Lee has settled this debate long ago. Besides, Ronda Rousey told Maxim last year that Ali would absolutely crush Lee in a street fight.

The Rowdy One has spoken, but we still have a feeling that this debate will rage on for years to come.