“There is no hunting like the hunting of a man.” 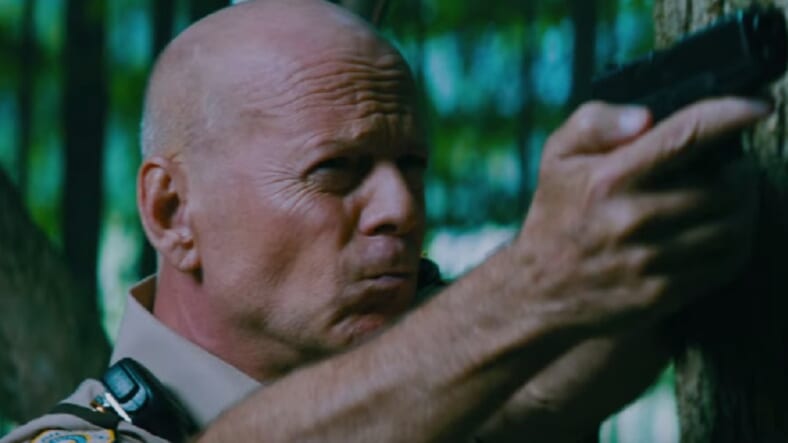 By now it seems like Bruce Willis should have summary arrest powers and a badge he carries everywhere because damn, does he play a lot of cops. Then again, the 62-year-old action hero is really good at it. He just embodies the spirit of “guy who’d hold a gun on you while snarling catchphrases and wearing a uniform.” So he’s doing it again in First Kill.

Co-starring Hayden Christensen, Kill is a thriller in which Christensen’s character Will takes his wife and his young son Danny on a trip to his old hometown. The movie’s official synopsis can take it from here:

While out hunting with Danny, the trip takes a deadly turn when they stumble upon several robbers and witness the murder of one of the criminals. After becoming entangled in a bank heist gone bad that results in the kidnapping of Danny, Will is forced to help the kidnappers evade the police chief (Bruce Willis) and recover the stolen loot in exchange for his son’s life.

Trailers are often cut to give the impression viewers are going to see a completely different film from the final product. That could be the case here, of course, but watching this preview it’s easy to sense that story may not be nearly as straightforward as the synopsis makes it sound. It seems like Christensen’s character might be up to something.

Whatever the case it’s got everything Bruce Willis fans want in one of his movies: ass-kicking, guns, running, and the action star looking steely and growling at people.