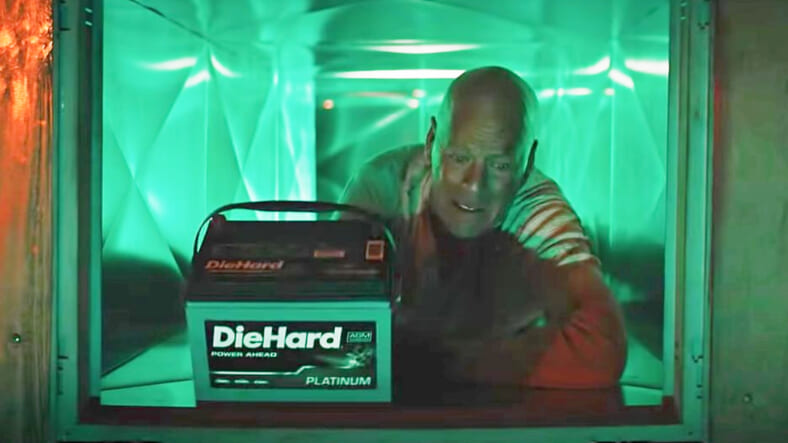 Even though Bruce Willis is now 65, he’s still not above some Die Hard-style shenanigans. At least in the name of selling batteries.

Willis has returned to his iconic role as beleaguered but heroic cop John McClane in a new commercial for DieHard car batteries. And McClane is still getting in trouble and escaping through airshafts.

Willis’s daughter Rumer shared the spot via Twitter, posting the video with the hashtag “#DieHardIsBack.”

The spot is nearly two minutes long and starts out like the original movie in that it’s just a regular guy with the prosaic problem of a dead battery. Only that guy is Willis as McClane. So as soon as it is clear his battery is gone, bad guys show up and chaos ensues, leading to McClane crashing through the front of an Advance Auto Parts, where he tells the clerk he needs a battery and escape route.

She indicates the airshafts are the best way out and Willis delivers a very McClane-like “C’mon, are you kidding me?” before the camera cuts to him inside the shaft with his new battery.

Other Die Hard actors appear as well, and it almost seems like those who conceived the spot tried to make sure it stayed in canon with the movies. Clarence Gilyard plays the villain and he was the only one of Hans Gruber’s (Alan Rickman) toadies to survive in the first film.

And the whole thing is canon, really, since it contains Die Hard signatures like explosions and escapes and plot twists.

The commercial naturally led to questions regarding a full-length movie return for John McClane, despite Willis’s age (in his defense, he does look like he’s still capable of handling the work). While there were plans in place for a prequel as recently as 2019, Disney’s purchase of Fox followed by the novel coronavirus’s devastating impact on the entire industry beginning in early 2020 have apparently put a true return for the character who made “Yippee ki-yay, motherfucker” an iconic rallying cry on hold.

Winter is coming, though, and people will definitely be looking for new car batteries. Advance Auto Parts and John McClane have you covered.