The funnyman co-hosts “The Fighter and The Kid” podcast and is a regular guest on “The Joe Rogan Experience.” 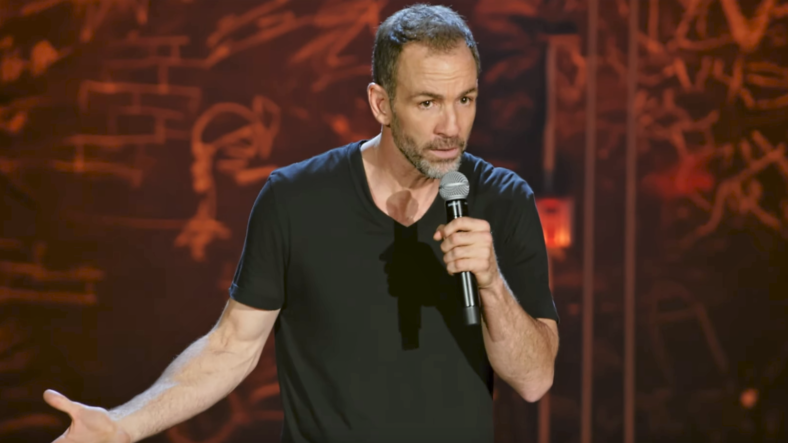 Bryan Callen hilariously breaks down the differences in behavior between political ideologues on the left and right in this exclusive first look at the new trailer for his third stand-up special, Complicated Apes.

Without even watching Callen sort activities into different sides on stage, you can probably guess which ones correlate to each group.

The 52-year-old comedian also addresses the general paranoia that comes with being the parent of a 10-year-old girl.

“Any grown man just driving a van around,” he says almost incredulously, “should be arrested IMMEDIATELY!”

Speaking about the inspiration behind his new hour, Callen told Maxim, “I’m arguing for a more forgiving and nuanced definition of the human ape and offering a way out of our current tendency to label and categorize our fellow human.”

“But I’ll get you laughing first because I’m not a teacher, philosopher or politician—I’m a professional jackass.”

Callen, an original Mad TV castmember whose acting credits include appearances on TV shows like Entourage, Californication and the first two movies of The Hangover trilogy, co-hosts the hit podcast The Fighter and The Kid with former UFC heavyweight Brendan Schaub.

He and Schaub are also regular guests on The Joe Rogan Experience. Though he’s sat across from host Joe Rogan over a dozen times, Callen is fully aware of his reputation for, er, occasionally misspeaking.

“I listen to how bad I am at listening,” he says. I’m wrong every time I open my mouth, but people listen anyway.

“There was also that time we had 50 Cent on [The Fighter and The Kid],” Callen added, “and I couldn’t understand what he meant by everything—and I mean everything—he said.”