“I would be interested if someone has an idea of how to develop a tribute movie to the amazing Mr. Lee.” 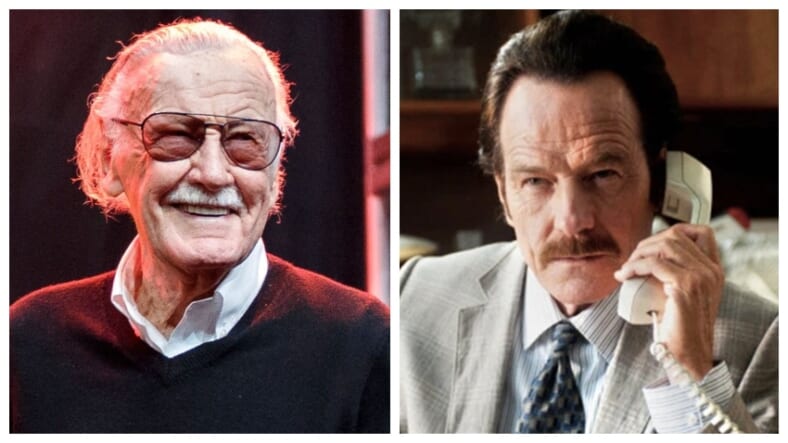 A couple of years ago someone noticed an improbable resemblance between Marvel Universe creator Stan Lee and Breaking Bad star Bryan Cranston. The improbable part is just that it occurred to anyone to make the comparison. The resemblance is undeniable, despite a considerable difference in age (Lee was 95 when he died on Nov. 12, Cranston is 62).

The likeness resulted in some fan art, and honestly, a mockup movie poster featuring Cranston as Lee is pretty damn convincing. See below.

Eventually the question of whether he’d be willing to take on the role should there be a biopic found its way to Bryan Cranston. His answer? Well, he tried to hedge a bit, but wasn’t convincing. He’d totally do it.

In an interview with Unilad, he said Lee was a “man who had tremendous insight into how to humanize superheroes, how to make them relatable and by giving them flaws, relatable human flaws, that made them accessible to audiences.”

Given Cranston’s Walter White was one of the greatest and most flawed antiheroes in television history, he knows what he’s talking about.

About time the geniuses of Hollywood make this happen: a Stan Lee biopic played by Bryan Cranston. pic.twitter.com/PFNXRkTjvK

Cranston also said he felt Lee “had a natural sense of communication and an honest authentic way of writing that material that really drew the audience in in order to really invest in those characters.”

“Sure,” he concluded, “I would be interested in looking into that if someone has an idea of how to develop a tribute movie to the amazing Mr. Lee.” Hey, actors know better than to totally commit to a project before it even exists, so this is about as close as we’ll get at the moment to Cranston saying, ‘Hell YES I’d do it, bring it on!’

Unfortunately there aren’t any known plans to make such a movie, at least not at the moment. However, since Stan Lee was an icon and lived such a long life, it seems like a given we’ll see a big screen portrayal of him one day.

And even if he didn’t resemble a younger Lee, an actor of Bryan Cranston’s caliber would still be perfect for the role.