Jennifer Lawrence Could Be Getting A Mystique Spin-Off Movie

But is J-Law still feeling blue enough to accept the role? 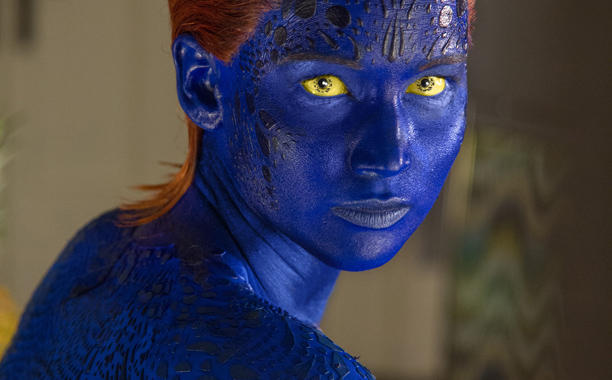 The hype behind X-Men: Apocalypse is beginning to die down, and with the film’s several open-ended plot holes comes a very big question: Who will return down the line for a future chapter in this ever expanding portfolio of mutant movie stars?

An updated spin on the lore’s timeline has typical villainess Mystique (Jennifer Lawrence) with a halo over her head, leading the baby-faced team of students into battle as their heroic leader against titular villain, Apocalypse. But even with this latest installment (and essentially, the entire trilogy) shaped around JLaw and her evolution as Raven Darkholme, there’s now hope for a box office spotlight on just the shapeshifter, courtesy of director Bryan Singer.

Despite J-Law’s reluctance to continue on as the scaley blue badass of the X-Men franchise, 20th Century Fox and Singer would throw big bucks behind a solo outing showcasing the 25-year old superstar.

“People have asked if I’d do a stand-alone [movie about Mystique],” Singer said during a recent Empire podcast. “I think she’s right. . . . She has that view of the world.” He then shifts gear and explains exactly why the film doesn’t align perfectly with previous comic book arcs, and why that’s a perfect reason to give Mystique her own vehicle.

“I think [Mystique’s] right for [a standalone], whether it’s Jennifer or not,” said Singer. “She has this different view of the world: Xavier can get into Cerebro and look at the world but he’d rather just teach classes and see the beauty of mutants and humans co-existing in his mansion in Westchester. Along comes Raven with a reality check on the state of the world. It opens up a lot of avenues.”

Even though the A-lister has said the comic book chapter of her life may not be fully closed, her extreme distaste for the role in an interview with Entertainment Weekly regarding her character’s makeup and wardrobe (or lack thereof) seems like she’s ready to put her mutant days behind her.

And with the man behind Apocalypse introducing the possibility of recasting, who knows what could come from this unexpected Mystique saga – even if J-Law isn’t attached to it.