Sit back and enjoy every one of them. 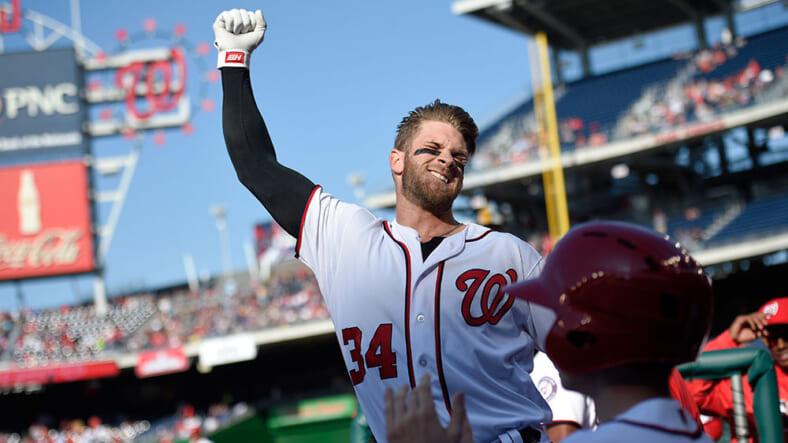 Bryce Harper, an elite American athlete with the name of character from The Baby-Sitters Club, hit the 100th home run of his career on Wednesday night — and he did it in style. The third-inning shot was a grand slam, the first of his career, and it went a long, long way.

At 23 years and 181 days old, Harper is the eighth youngest player to hit the longball century mark. Baseball’s home run king, Barry Bonds, didn’t get there until he was 25 years and 353 days old. And baseball’s home run king as far as old white men are concerned, Hank Aaron, was 23 years and 191 days old. Not that Harper’s achievement makes it very likely he’ll catch either of those two. After all, Mel Ott, who hit his 100th home run when he was more than a year younger than Harper, is now 24th on the all-time home run list.

One interesting bit of trivia about Harper’s 100th homer is that it came after he decided to ditch the cute little emoji stickers he had on his bat earlier this week.

On Thursday, his bat was bare and then the bomb came.

Harper’s gotten off to a hot start to the the 2016 season, slashing .250/.400/.679, but as is increasingly the case with him, his mouth has been attracting more attention than his play. Beginning with his quotes in an ESPN the Magazine story last month, Harper’s been on a mission to make baseball more fun. That explains the emoji and his Donald Trump -aping “Make Baseball Fun Again” hat.

As much as we appreciate the antics though, Harper is at his best when he’s crushing dingers. And so we leave you with this, all 100 of his ding dongs.