Come for the first look at Brie Larson as Captain Marvel, stay for the bonkers fan theories about “Avengers 4.” 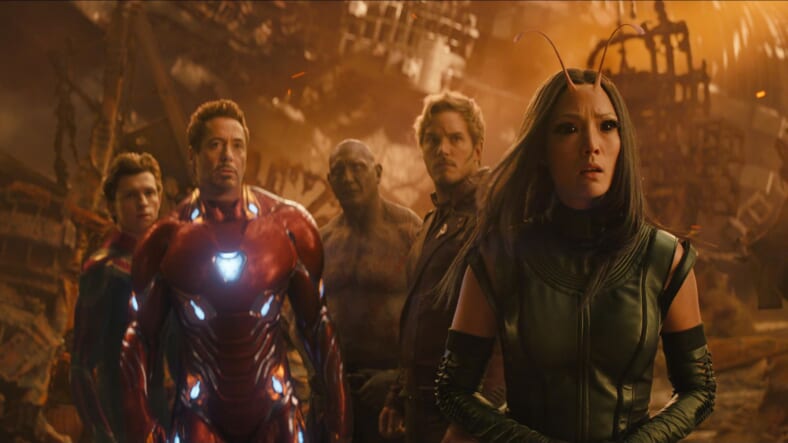 When new plot details and images were released a few days ago on the upcoming Captain Marvel movie, fans who have spent their waking moments speculating on how the movie will pan out were finally presented with (blindingly obvious) clues about Avengers 4, and cooked up some admittedly plausible theories.

Paging Carol Danvers. 🙌🏾 When #BrieLarson takes flight as #CaptainMarvel in March 2019, she will be the first female solo lead in the #Marvel Cinematic Universe. Swipe through to see exclusive new photos of Larson, #JudeLaw, and #SamuelLJackson from the upcoming film, and click the link in our bio for even more images! 📷: Chuck Zlotnick/© Marvel Studios 2019; © Marvel Studios 2019

A post shared by Entertainment Weekly (@entertainmentweekly) on Sep 5, 2018 at 9:38am PDT

Allow me to explain:

At the end of Avengers: Infinity War, Nick Fury sends a distress signal to Captain Marvel as Thanos collects all six of the Infinity Stones and destroys half of the universe. However, even though this means most of the superheroes died, something happens in A4 that allows Black Panther, Spider Man, and some of our other favorite superheroes to return for what can only be presumed to be endless sequels.

So, from the new information on the Captain Marvel movie, one theory we can assume is that Captain Marvel gets the gauntlet and reverses time, and proceeds to kill Thanos before he can completely fuck up the universe.

Captain Marvel gets the gauntlet, reverses time and then merks thanos in the first 5 minutes of A4 and the rest of it is just everyone moving into the avengers tower and doing grocery shopping together then going to bed at 9pm, the Russos personally told me to tell yall this

Captain Marvel's going to steal the time stone from Thanos and go back in time right before Thanos gets stabbed and tell Thor to GO FOR THE FUCKING HEAD pic.twitter.com/LpZrGFoFW8

Another theory is that we know that Brie Larson’s character Carol Danvers is a half-Kree, half-human pilot who joins the Kree military, but we don’t know anything about her past.

The future is female! 👊 Here’s your very first look at #BrieLarson as #CaptainMarvel, the galaxy’s newest — and most powerful — star. Click the link in our bio for an exclusive preview, and pick up an issue on newsstands starting 9/7. 📷: Michael Muller/© Marvel Studios 2019

A post shared by Entertainment Weekly (@entertainmentweekly) on Sep 5, 2018 at 9:02am PDT

Carol finds herself back on Earth with new questions about her past. And she’s got a formidable enemy in the form of the Skrulls—the notorious Marvel baddies made all the more dangerous by their shape-shifting abilities. Ben Mendelsohn plays their leader Talos, who spearheads a Skrull invasion of Earth.

From this, we can perhaps assume that the “Secret Invasion” will happen, which is, according to the Marvel Wiki:

After experimenting on the Illuminati, the Skrulls replaced various super-humans since before the events of House of M, beginning with Spider-Woman (replaced by a fake attempt by the Skrulls to restore her powers), Hank Pym, Black Bolt (replaced when the Illuminati attacked the Skrulls), Elektra, various agents of S.H.I.E.L.D., Edwin Jarvis, Dum Dum Dugan, etc. After the Civil War, the Skrulls intended on implanting a Skrull in every 50-state superhero team. It is unknown if that had actually occurred or how far they got with their insurgents.

Since Captain Marvel takes place in the ’90s, it’s very possible that one of the Avengers is a Skrull in disguise. As Esquire points out, it’s vague what that would mean for Avengers 4, but it’d make for a juicy plotline for yet another Marvel movie.