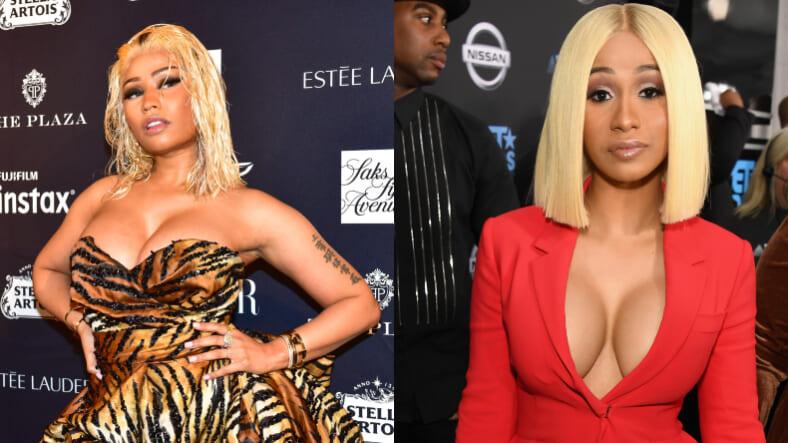 The beef between Nicki Minaj and Cardi B just got physical.

Footage of the catfight is making the rounds on social media. In one video, Cardi B lunges at someone believed to be the “Barbie Dreams” artist. Someone can be heard screaming, “I will fuck you up!”

Cosmopolitan has further details on what went down:

Sources from inside the party say Nicki was taking a photo with Kelly Rowland and La La Anthony when Cardi walked past. Reportedly, Nicki deliberately stepped on Cardi’s train, and then Cardi threw her shoe at Nicki. You can see a shoe being removed in the video above, and hear a ‘thwack’ noise as it makes contact with its intended target, or some poor security guard who had to take it.

People reports that “Bartier Cardi” was left with a ripped Dolce & Gabbana gown and a giant lump on her head that was visible in multiple photos.

Nicki Minaj and Cardi B were involved in an altercation Friday night that got physical at a New York Fashion Week party: https://t.co/gxee10oqyJ pic.twitter.com/X5nvJ4cCPE

“I’ve let a lot of shit slide! I let you sneak diss me, I let you lie on me, I let you attempt to stop my bags, fuck up the way I eat!” she wrote. “You’ve threaten other artists in the industry, told them if they work with me you’ll stop fuckin with them!! I let you talk big shit about me!!”

Cardi B went on to claim that the rival femcee had spoken ill about her parenting abilities.

“I addressed you once in person, I addressed you a second time in person, and every time you copped the plea!! But when you mention my child, you choose to like comments about me as a mother, make comments about my abilities to take care of my daughter is when all bets are fuckin off!! I’ve worked to[sic] hard and come too far to let anybody fuck with my success!!!! Bitches talk all that shit in they raps but in real life they pussy!! This shit really is for entertainment!!”

An NYPD Public Information Officer told People that the “incident itself has ended, the investigation is still ongoing.” No arrests have been made.