“They did Joe so dirty over and over again.” 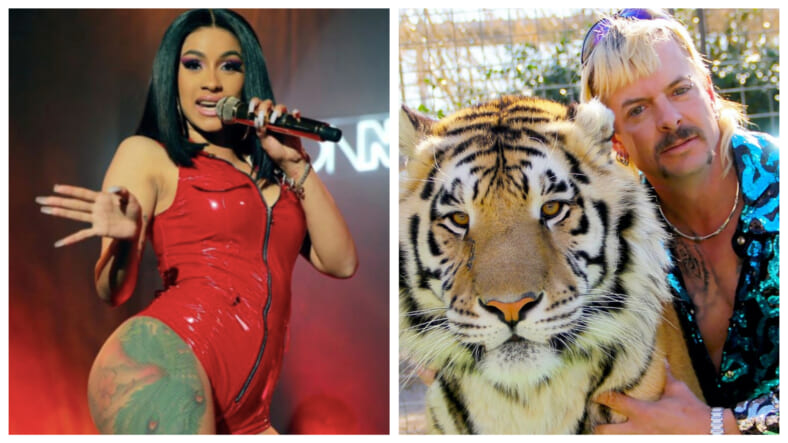 Netflix’s latest true crime smash hit, Tiger King, is stirring up a lot of attention from homebound celebrities like Kim Kardashian and now Cardi B. Kim K. wanted to know just how dirty everyone is, wondering if Carole Baskin, who was targeted in a murder-for-hire plot by Oklahoma exotic animal park owner Joseph Maldonado-Passage—known as Joe Exotic—may have actually killed her husband who vanished in the late 1990s.

Cardi, on the other hand, thinks Joe Exotic, currently serving 22 years in prison for a plot to murder Baskin, was done wrong. She wants to do something about that.

Bout to start a gofundme account for Joe .He shall be free.

“Bout to start a gofundme account for Joe,” she tweeted Saturday, “He shall be free.”

In another, earlier tweet about Tiger King: Murder, Mayhem, and Madness, Cardi wrote: “They did Joe so dirty over and over again.”

They did Joe so dirty over and over again

And the 27-year-old rapper has absolutely no use for Carole Baskin, either.

Carol you think you slick bitch 😒😒😒😒

“Carol you think you slick bitch,” she tweeted.

Even though Baskin is framed to some degree as the closest thing the series has to a protagonist, with Joe Exotic as her intriguing and sometimes surprisingly sympathetic nemesis, many have found her behavior regarding her missing ex-husband Don Lewis highly suspicious. Cardi made it clear as to what she suspected with a retweet.

The image meme reads, “Carole Baskin fed her husband to the tigers. CHANGE MY MIND.”

Cardi B wasn’t having any complaints about her passion for the show, either.

To a fan who complained, she simply responded, “I Stan [Joe]…Leave me alone.”

As for Joe Exotic (Maldonado-Passage), he still has irons in the fire, as a Florida TV station reported he filed a $94 million “federal civil rights lawsuit from prison against multiple government agencies and his former business partners three days prior to the docuseries drop.”

Variety reports that Tiger King is, as of March 29, 2020, Netflix’s most popular show. While there have been random complaints about the length of the series (seven episodes) it’s actually a remarkably well-made story that manages to be sadly funny and just appalling at the same time.

Decided for yourself whether Cardi B has a point by watching Tiger King on Netflix while it’s still available.