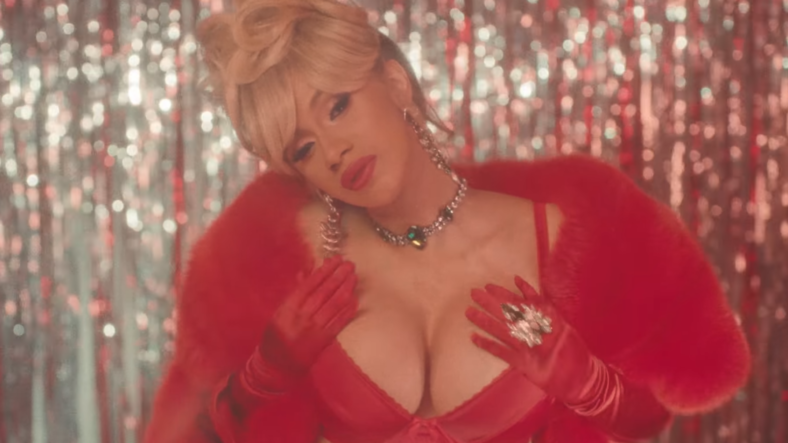 Cardi B just dropped a sultry music video for “Bartier Cardi,” the second single from her hotly-anticipated debut studio album, Invasion of Privacy.

The video already garnered more than 2 million views in one day, and features two guest appearances from hip-hop superstars. 21 Savage, who famously anchored Post Maone’s “Rockstar”, spits some rhymes, while Cardi’s fiance, Migos rapper Offset smooches her in the back of a car.

Meanwhile, as hype surrounding her forthcoming album continues to build, a legal battle is brewing over her debut mixtape, Gangsta Bitch Music Vol. 1.

The eye-popping cover art features Cardi pounding a Corona while apparently getting pleasured by a dude with a tiger tattoo on his back in the back of a limo. Yep, this photo really has it all.

According to TMZ, a man named Kevin Brophy claims that the ink was lifted from his back without his permission. He’s now suing Cardi and her managers for $5 million.

The tweet below shows similarities between the two pieces.

Ahhhh, so that’s why she couldn’t spare a dime to pay for the artwork she stole freely from me, for her album cover. pic.twitter.com/MZjlLFQynU

Her defense? The man on the cover is a “dark-skinned male” and Brophy is white.

If the lawsuit continues, she might have more to worry about than getting taxed by Uncle Sam.

Meanwhile, Cardi is totally making history by being the first-ever co-host of the Tonight Show with Jimmy Fallon. As per Hypebeast:

After granting Jimmy Fallon a rousing interview in December, Cardi B will return to the show on April 9. This time, however, instead of being the interviewee, Cardi will join Fallon on the other side of the table, as she becomes the first-ever The Tonight Show co-host.