Now THIS is how celebs should behave in public… 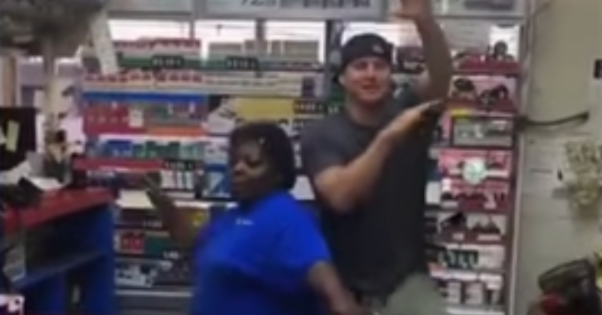 What do you do when you swing by the gas station? Grab a giant key to go pee? Pick up some beef jerky and a Mountain Dew Baja Blast to help get you through the day?

Well, when you’re a Hollywood megastar like Channing Tatum, those mundane tasks just ain’t gonna cut it. While traveling through North Carolina on Tuesday, the Magic Mike and Jump Street star streamed a video of himself making friends with a store clerk, Beatrice, on Facebook Live.

After showing off his keen dance skills, he posed for a photo with a fan and signed Beatrice’s hat.

According to USA Today, fans in Knoxville, Tenn. also got lucky Wednesday when Tatum stopped by for a charity fundraiser and the premiere of his new film, Logan Lucky, to take selfies with the crowd.