Plus, ‘The Conjuring 2’ trailer scares the sh*t out of us, and leaked ‘Arrow’ set photos reveal new details about a beloved character. 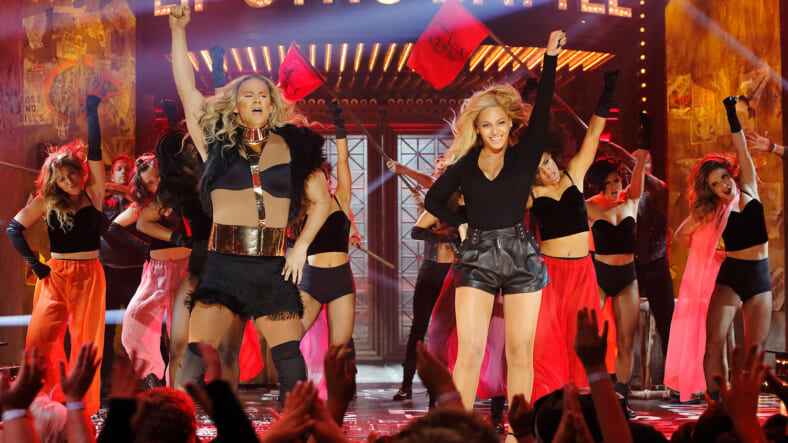 Channing Tatum Runs the WorldIn what might be their best episode yet (sorry, Kendrick v. Krasinski), Lip Sync Battle returned for its second season with an all-out #TatumTakeover that we’ll talk about for years to come.

In a borderline NC-17 performance of ‘Pony,’ wife Jenna thrusted, grinded, and stripped down in attempts to earn the title, but it was husband Channing who went full drag with his performance of ‘Run the World’ that will forever be burned in our brains. The best part? The queen herself, Beyonce, joined the Magic Mike XXL star on stage, causing the heads of millions across the globe to explode simultaneously. While the battle ultimately ended in a (fair) draw, hats go off to Mr. Tatum for his confidence to don a blonde wig, tights, an uncomfortably looking dress, and pounds of make-up, all for the sake of art. We salute you, sir.

Arrow Set Images Could Reveal Big ThingsThe midseason finale left fan favorite Felicity Smoak (Emily Bett Rickards) fighting for her life, but when the show returns this January, we might see her in a different light. Thanks to a few leaked set images, we can see the beloved character in a wheelchair, and as some suspected, ‘Oracled.’ This is in reference to the comic book persona originally taken on by Commissioner Gordon’s daughter Barbara (aka Batgirl) after being shot by the Joker. While there’s no immediate confirmation that Felicity will become Oracle, it’d be pretty damn sweet to see her team up with Black Canary and Huntress to form their own little ‘Birds of Prey’ squad. CW’s Arrow returns on January 20th.

I believe 1st public photos of #Arrow actress Emily Bett Rickards on set as Felicity Smoak in her wheelchair. pic.twitter.com/uLekJGHkk0