“He’s my friend, and we did a big, popular thing together.” 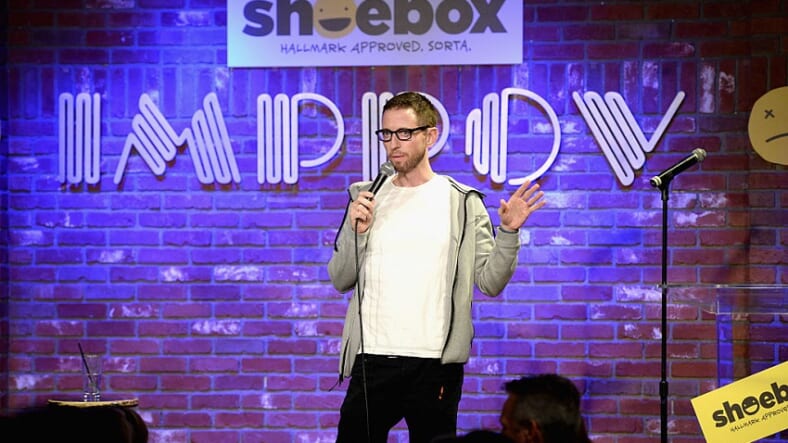 Unless you paid attention to the credits for comedian Dave Chappelle‘s legendary sketch comedy series, Chappelle’s Show, Neal Brennan’s name might be unfamiliar. He co-created the show with Chappelle and was one of the guiding hands and hilarious voices behind many of the classic Chappelle’s Show sketches everyone still quotes to crack up friends.

In 3 Mics, his original comedy special which premieres this week on Netflix, Brennan has created a one-man show with a side of stand-up comedy. He literally switches between three microphones situated on stage—one for stand-up, the second for revealing personal monologues, and the third for short, punchy, Twitter-friendly jokes. Brennan, currently a writer and creative consultant for The Daily Show, has a quiet charisma and intensity in addition to a seasoned comedian’s hand with good punchlines that turns 3 Mics into something that feels more like a carefully conceived and well-executed Broadway experience than everyday stand-up.

Maxim spoke with Brennan about 3 Mics, the material that went into making the show, and yes, about Dave Chappelle.

Tell us more about the concept behind 3 Mics.

I do stand-up and when Twitter first started, I was like, “I have all these jokes from Twitter that I think would get a laugh in public.” Then I thought it would be funny just to have like a mic on the side of the stage that I would do those with. And then I never did that.

Then I would listen to The Moth Podcast and those storytelling shows, and I was like, “I feel like I could do that.” I would see my friends do shows sometimes and they’d get emotional or they’d get upset and they’d be earnest… like Whitney Cummings cried one time on Howard Stern and I was like, “that is way more interesting—or just as interesting—to me as what they have to say as comedians.” So, I figured if I put three mics on stage and just alternated, it might work.

Then I tried it on The Meltdown on Comedy Central in a really, really pared-down, sort of embryonic version and that worked, that felt pretty good. Then I was like, “I should try to build out on that one.”

As I was doing it, it was one of these things where it clicked… just in terms of it working or not, I could tell that it worked, and the times it didn’t work—like the first time I did it, the audio didn’t know I was gonna do it. I do a weekly show where I normally do 20 minutes and I was like, “well, tonight I’m gonna do an hour, and a lot of it’s gonna be emotional.”

People that didn’t know that I was gonna be emotional—people that came when the show was all worked out—when I first say, “I’m depressed,” people go, “ah-ha-ha-ha” and I was like, “no, we’re not laughing yet, this is gonna be a little serious, y’know.”

Your business has been jokes, really good comedy. Was it tough to get on stage and dig into something serious as depression?

I gotta say, the stigma of depression, to me, is not real. I don’t feel any stigma about it. I’ve long since stopped thinking that it was somehow a weakness.

Now, the way I talk about it—the point of that first monologue—is to say, “shut the fuck up about saying it’s a weakness.” Basically, I outline my struggle with it and it’s like, “don’t say that I’m lazy. And by the way, people you know with depression aren’t lazy, either, because this shit is a nagging constant that we all are dealing with and trying to figure out ways to overcome.”

I ended up cutting [this] out because I was talking about Robin Williams, someone saying he was weak—[but] I was like, dude, if you think he’s weak, who don’t you think is weak? If Robin’s weak, everyone’s weak.

So I never felt a stigma, but I know there is a lot of it out there, and I tried to make that monologue about de-stigmatizing it and just making it like, “it’s mostly just an inconvenience.”

Hopefully, if someone says, “I have depression,” people think, “oh that sucks,” like having an emotional bunion or something, or appendicitis. It’s not a character flaw.

Maybe the show kind of takes care of this, but have you considered writing just a full-on memoir?

I started, actually. I probably wrote like 10,000 words or so. The thing with writing a memoir—for me—would be… You know, I don’t want to be tattling on people, if that makes sense.

I don’t want to be snitching, like “And then Dave was like nyaaahhh…” Because that’s kind of part of what people would want.

Was getting backing for the show tough, or did your resume pretty much make it a done deal?

The backing was my own backing. I had to kind of finance it myself. It wasn’t so expensive, though. Basically, Mike Birbiglia and Colin Quinn had done enough of these shows in New York, they knew how to do these shows on the cheap.

You really cover it in the show, but does it get old, answering questions about Dave Chappelle?

No! The thing with Dave is—you know when a child actor changes their name from “Robbie” to “Robert” and they’re like, ‘Robbie is dead?’ No, I understand that that’s an interesting part of my life and career, so I don’t mind talking about him.

Like I said, I helped him with SNL, he’s my friend, and we did a big, popular thing together. I get that. It’s like, you know—guys from Pink Floyd are going to talk about Pink Floyd for the rest of their life.

Neal Brennan steps up to the first of 3 Mics when the special begins streaming on Netflix on January 17.