The ‘Daredevil’ star on his iconic character and his heady new play. 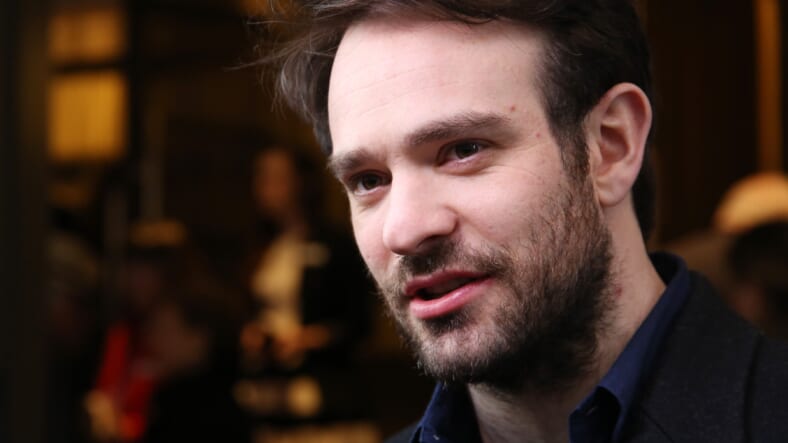 Though he never really considered performance art as a career, Charlie Cox has blossomed into a multi-faceted actor praised for his versatility and the depth he brings to each of his roles. The 33-year old has dominated on both stage and screen, with his latest challenge placing him in the heart of Hell’s Kitchen as titular superhero Matt Murdock, a blind lawyer better known to comic book fanatics as vigilante ‘The Man Without Fear,’ in Netflix’s hit series, Daredevil. Fresh off the hype of season two, Cox is transitioning back into the world of theater, substituting his lack of sight for a disillusion of the mind in Nick Payne’s Incognito, an Off Broadway production chronicling three intertwined stories of mind, body, and self.

Ahead of the performance previews kicking off May 3rd, Maxim spoke with Charlie about the transition back to theater, how Incognito would appeal to fans of Daredevil, and if he’s #TeamCap or #TeamIronMan.

How do you prepare to bring Daredevil from page to screen? When I got the job, I had never read any Daredevil comics, so I read the scripts, and that gave me a real sense of who this character was and which version of Matt Murdock he was. In the preparation period, I went and started reading all of the comics, and I was able to find certain writers or certain illustrators or certain runs that I think represented the show really well. I kind of focused in once I discovered the Frank Miller ‘Man Without Fear,’ the Frank Miller ‘Born Again,’ and even Joe Quesada’s ‘Guardian Devil’ which is totally in the right place. I started to hone in on those ones. I’d always go back to the comics and always go back to the panels and any moment in the script that I didn’t quite understand, it’s almost always in the comic somewhere.

Going into a second season, has the load felt lighter on preparation for choreography, stunts, and portraying a blind man?If anything, I’m probably doing more of the stunts now than I was at the beginning, because I’m getting better at them, and I enjoy them so much. It takes less of a toll on my body because I’m used to it, so I know how to warm up. In the first season, I was constantly trying to get into shape. When I got the job, I had a month until we started shooting, and I was trying to get into the gym every day and trying to learn this choreography and trying to learn the blindness and the accent. I felt like it was all coming at me at once. For the second season, I had a much better grasp of all of those things.

How do you envision Daredevil fitting into a larger scale with Marvel if he were to encounter other superheroes?It would just depend tremendously on what that exactly was, and what the storylines were and who the characters were. None of those conversations have been had with me at any time, so it’s hard for me to even imagine. It’d be fascinating to find out, and we will find out with The Defenders. Because he’s such a lone wolf in many ways, and he’s such a sucker for punishments, , it’ll be interesting to see. He’s very stubborn and arrogantly believes he’s the only one capable of making any difference in the world. So it’s going to be interesting to see how he teams up with others.

What has the transition been like going from being a superhero to stage work?Well, it’s been really fun to be able to use my eyes. It’s been two years since I’ve done any acting and have been able to use my eyes to look at the other actors and the characters, so that’s been really fun. We’ve just been in the rehearsal room for a couple of weeks, and I’ve really enjoyed having the time and the space to try things and experiment and not feel that the time pressure which is inevitable in making a television show.

How would you describe Incognito and your character’s involvement?It’s about four actors, we all play multiple characters, and I actually play six different characters. But one of them, the character I play the most, is a gentleman named Henry Mason who underwent an operation to help alleviate his epileptic seizures, which meant a removal of a part of the brain called the hippocampus, and from that point forward he was unable to make new memories. All the information he received, he effectively couldn’t store it, so it dissipated into air in about ten to twenty seconds, so he lived the rest of his life that way.

Does this work remind you of anything you’ve done in the past?It’s very very new. I’ve done nothing like this before. It’s been really great. It’s been quite challenging, and one of the things that’s been unpredictably is that because his memory fades, he tends to repeat himself a lot and say the same sentences over and over again, which is quite difficult to learn, because you’re effectively saying the same sentences in different orders, and trying to remember what the order of each scene is is quite challenging.

What would Daredevil fans find appealing about a play like Incognito?I don’t think there’s anything specific, it’s just an interesting, challenging, abstract play. It’s full of bizarre moments and characters, and you’re kind of constantly playing catch-up. You can’t seem to find a through-line or a clear storyline. Hopefully, it will be a really interesting and enjoyable experience. With this play, there’s no point in trying to follow it, you just have to let it wash over you, and get from it what you do. Daredevil fans, at least the ones that I’ve met, seem to have really interesting insight into the show and into the characters. They’ve read deeply into a show that we’ve tried to make, that would suggest to me that they would find this kind of interesting.

And with the prospect of a third season for Daredevil on the horizon, what do you hope to do if you get to suit up once again?I think Daredevil took a real beating in the second season, his ego got beaten down. He was very humbled by the end of it. He essentially kind of fails in the second season. He tries to keep lids on all of these pots and he refuses to accept help, and his arrogance allows him to keep his city safe, which he’s ultimately not capable of doing, which also paves the way for the surprise at the end of it all. Maybe, what I’m interested in seeing going forward is, through forced humility, he will come to accept that help. Maybe that’s where The Defenders come in.

Now, in the ‘Civil War’ comic, Daredevil has aligned himself with #TeamCap. If you were on the outside looking in, would you choose the same as your comic book counterpart, or pick #TeamIronMan?I think I would pick #TeamCap. But then again, that might not be what Matt Murdock would do.

For more information on how to see Charlie in ‘Incognito,’ click here.