Viewers were absolutely addicted to this gripping mini-series about Russia’s 1986 nuclear disaster. 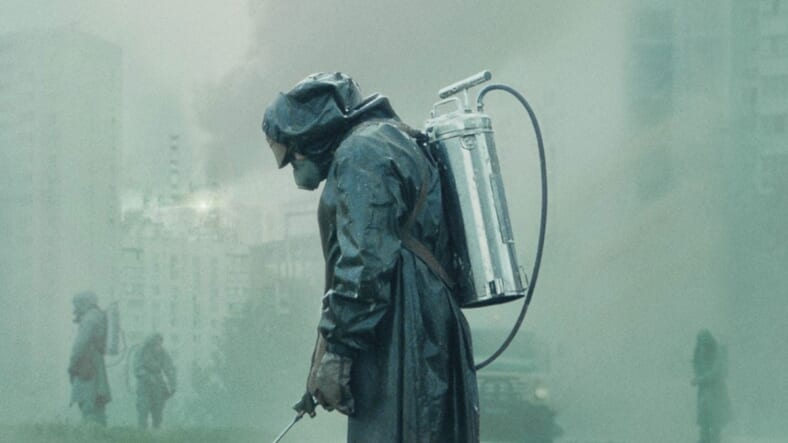 HBO‘s Chernobyl, which aired its finale Monday night, was a limited-run series about a real historical event. The kind of thing that could have been merely interesting, at worst boring and dry.

Instead it was a blockbuster success for the pay cable giant, considered by viewers and critics one of the finest shows of its kind.

Social media critiques were uniformly positive, but that wasn’t the only evidence of Chernobyl‘s quality.

Forbes culled audience ratings for the portrayal of the Ukraine nuclear disaster that killed thousands and left an entire region uninhabitable and Chernobyl‘s superiority is right there in the numbers:

That means that however many viewers the show has had—and Chernobyl hasn’t had Game of Thrones audience numbers—almost all of them consider it a masterpiece.

Chernobyl was a miniseries so perhaps a different animal from the likes of Game of Thrones or Breaking Bad, but it seems clear it was considered their equal if not superior.

Just a few tweets give plenty of anecdotal evidence as to audience response.

Man, Chernobyl is one of those periodic booster shots that inoculate us from the morbid self-loathing that accompanies a career in television. What fine, careful work from HBO and all who labored on it.

Final episode of #Chernobyl even more proof of how accomplished this series has been. At the very end, a poignant reminder of the immense human cost amid the lies. Pitiful the Soviet Union counted only 31 deaths-in reality, tens of thousands. Real urge to read up on it all now!

Just finished HBOs Chernobyl and I was gonna make some kinda cringy immature joke on twitter about it but let's be real, the emotion and sacrifice in that story are something even i cant mock. Its a masterpeice, and im not over-reacting. Unlike the poweplant. Got you again idiot.

#ChernobylHBO is the greatest dramatic documiniseries to date, to all those who suffered and sacrificed there to save our earth pic.twitter.com/ofX4tgTEZU

You can watch Chernobyl for yourself if you missed out here.