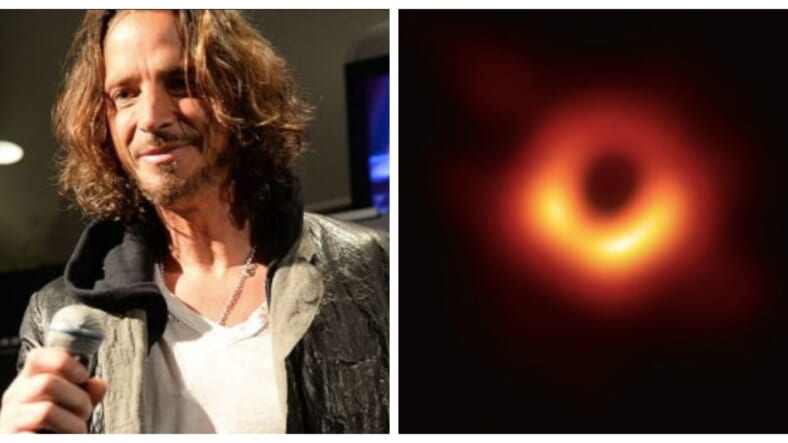 Almost as soon as scientists released the first photo ever made of a black hole, the inevitable happened: “Black Hole Sun” singer and late Soundgarden frontman Chris Cornell‘s name was thrown into the hat as a possible name for the massive celestial object.

This isn’t surprising, given that Soundgarden’s video for the trippy song is one of the most iconic ’90s rock videos ever made.

Here’s how the people who launched the Change.org petition explained their feelings on the matter:

Almost two years ago, we lost Chris Cornell. He was the lead singer for Soundgarden and Audioslave, and above all, the voice of an entire generation. He was one of the most beloved figures not just in rock, but all of music, by people from all over the world.His music, his voice and his personality inspired, influenced, changed and even saved the lives of thousands of people. Chris left a heavy legacy for a new generation of musicians who follow in his footsteps. His memory will remain forever alive in the hearts of all his family, friends, fans and all the people who love him, and his music will do the same in each record, song or video we play.“Black Hole Sun”, written by Chris Cornell is without a doubt Soundgarden’s most recognizable and most popular song, and one of the biggest anthems of the 90’s. For this reason, and the impact Chris Cornell had in the lives of so many and music itself, I ask NASA, the Event Horizon Telescope Collaboration and all the astronomers and scientists involved in this discovery, to name this black hole after Chris Cornell. This would be a “surreal” and amazing way to honor his life and his contribution to music.

That’s a pretty good case for commemorating Cornell in such a cosmic way.

Images of the distant and ultra-huge black hole in Galaxy M87 naturally brought to mind all kinds of epic and cataclysmic images.

The first ever image of a black hole vs. the Eye of Sauron. pic.twitter.com/FxKBfx6miW

This is the best blackhole meme so far #EHTblackhole pic.twitter.com/iw3rrDZDhL

I am sure the spatial resolution of the #blackhole images will get better in future. pic.twitter.com/uN9lmN9fGe

Okay so that last isn’t cataclysmic unless you’re on a carb-free diet, but still, point made.

Click on over and sign and hope we never actually have to deal with a Black Hole Sun anywhere nearby. At 55 million light years distant, M87 is about as close as we’re comfortable with.