Religious Leaders Do Not Want You to See ‘Deadpool’ 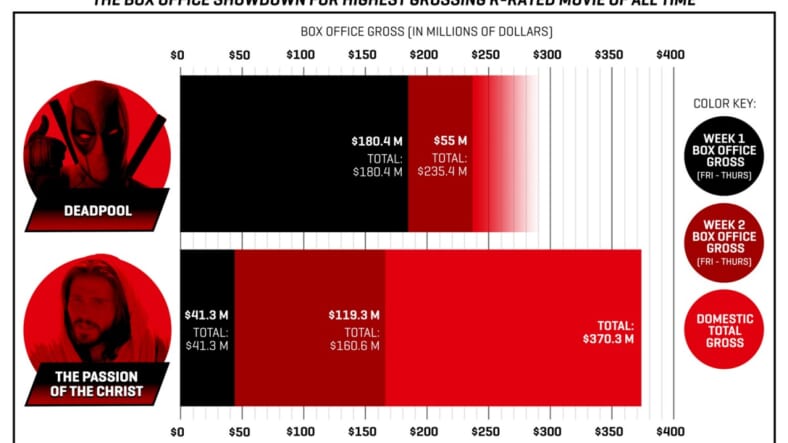 Religious leaders are urging the faithful to keep their distance from Deadpool, the latest Marvel superhero film, and not just due to of the undercooked plot or smarmy, irritatingly glib protagonist.

Describing the flick as “foul mouthed, sexually perverse, gratuitously violent and immoral by its own admission” — like that’s a bad thing? — he compares it unfavorably with more patriotic superhero films like Captain America and Iron Man, movies that “make us want to be better, more heroic people ourselves.”

Allowing that the main character, Wade Wilson, a former special forces soldier given superpowers through an advanced medical procedure, is “somewhat humorous,” he nonetheless goes on to slam the film as “the lawless fantasy of our sinful nature.”

The Christian Post, meanwhile, surveyed pastors across the country, many of whom seconded Kayser’s appraisal. “God is holy and that movie’s not! Nuff said!” one tweeted, noting that Christians should “absolutely not watch movies with any violence, nudity, or profanity.” Which, to be fair, doesn’t leave a lot of movies.

The website DesiringGod.com suggests spiritually minded moviegoers contemplate seven questions in deciding whether to view Deadpool, including “When Will I Tear Out My Eye, If Not Now?” and “Do I Care About the Souls of the Nude?”

Just ponder those for a second.

Geeks Under Grace also gave the film a theological thumbs-down. Despite acknowledging that “Ryan Reynolds does a bang-up job” and that “he is also self-aware, which is an attribute that can be helpful for anyone who is struggling with sin,” author Drew Koehler could not bring himself to recommend the film. “Knowing my own struggles and convictions, seeing this film would have triggered some sort of pornographic relapse had I seen it nine months ago,” he writes. “Thankfully, I have a wife who I am accountable to, and she was integral in me assuring I averted my eyes from the nude scenes in the movie.” Thanks, honey.

That may well be. And to judge by the movie’s box-office numbers, there sure are a lot of sinners out there. Deadpool had the largest opening weekend of any R-rated film in history, taking the No. 1 spot from…yes, you guessed it: Passion of the Christ. And it may yet dethrone the Mel Gibson religious epic as the top-rated R-rated movie of all time.

By the way, here’s that trailer again: