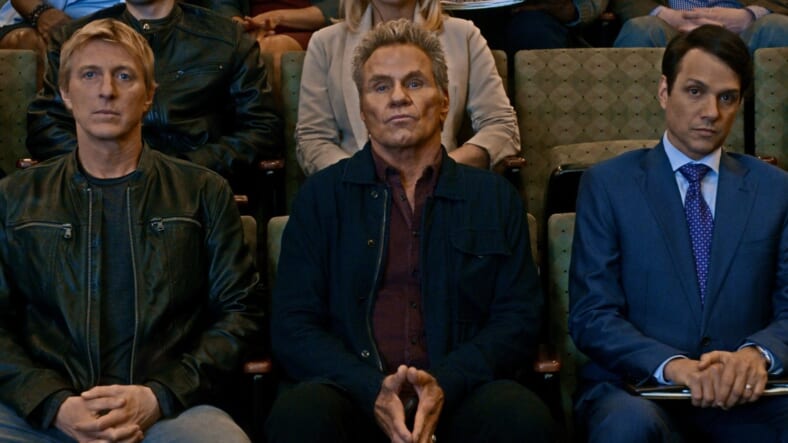 John Kreese is back. In season 3 of Netflix‘s Karate Kid spinoff Cobra Kai, Martin Kove returns as Kreese—middle-aged Johnny Lawrence’s (William Zabka) malevolent sensei in the first movie—and from the looks of things, he has not mellowed with age.

Season 2 of Cobra Kai—which premiered on Youtube then moved to Netflix—ended in a cliffhanger after members of Daniel LaRusso’s (Ralph Macchio, star of the 1984 movie) got into a brawl at their school and Kreese took Johnny’s Cobra Kai dojo out from under him.

Here’s Netflix’s synopsis of the next season:

COBRA KAI takes place over 30 years after the events of the 1984 All Valley Karate Tournament with the continuation of the inescapable conflict between Daniel LaRusso (Ralph Macchio) and Johnny Lawrence (William Zabka). Season 3 finds everyone reeling in the aftermath of the violent high school brawl between their dojos, which has left Miguel in a precarious condition. While Daniel searches for answers in his past and Johnny seeks redemption, Kreese further manipulates his vulnerable students with his own vision of dominance. The soul of the Valley is at stake, and the fate of every student and sensei hangs in the balance.

The trailer is excellent at building anticipation for the season, including the suggestion that Lawrence and LaRusso must join forces. It also makes it unequivocally clear that Kreese hasn’t improved, as he intones lines like “There is no good. There is no bad. Only weak, or strong,” over the sound of his students chanting the dojo’s name.

The exact date isn’t set yet but Season 3 of Cobra Kai premieres in January on Netflix.