The large-living rapper’s palatial estate sits on over 200 acres in Georgia. 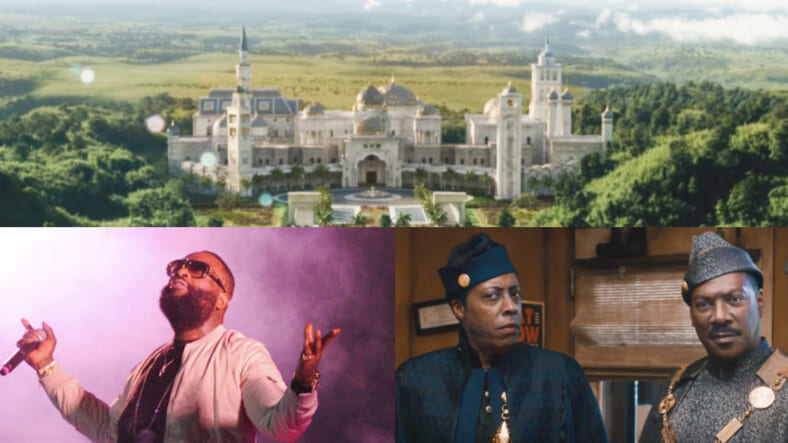 Rapper Rick Ross lives in a palace. At least now he does, as his massive mansion in Fayetteville, Georgia served as the Royal Palace of Zamunda in Eddie Murphy’s Coming 2 America.

Variety reports that the movie’s production designer, Jefferson Sage, said they had a “big problem” finding “a house that had the scale of the possibilities for a very lavish palace.” Enter multiple Grammy nominee Rick Ross and his 45,000 square foot, 100-plus room mansion, complete with an epic sneaker room.

That was the kind of scale the crew for Murphy’s sequel to his 1988 comedy classic needed. Sage told Variety that Ross’s “entrance foyer with the big two-story interior and double-winding staircase was perfect” as were a pair of adjacent “beautiful big rooms with giant windows and 18-foot ceilings. We used five key spaces that we turned into Zamunda.”

Those spaces were converted for the film’s primary sets, including the King’s bedroom and the dining room. The primary bedroom in the palace was Ross’s own. The rapper says 1988’s “Coming to America” may be his all-time favorite movie and that he was [pleased] to see Eddie Murphy and Arsenio Hall walking through his estate.“They changed the wallpaper in the dining room so I asked them to keep it up there,” Ross laughs. “They also created that huge dining room table for a dining scene that seats 50-60 people, and they left that for me as a gift. It’s humungous.”

The mansion was reportedly once owned by Evander Holyfield and has 12 bedrooms and a 100-person capacity dining room. Most exterior and some interior details were added digitally post-production—the outside of Ross’s place doesn’t look like the Zamundan royal residence, but it’s plenty impressive in its own right.

Rick Ross is clearly into the kind of luxury living a hip hop icon like him can afford—the New York Post reported Tuesday that Ross just “plunked down $3.5 million in cash on former NBA star Amar’e Stoudemire’s South Florida estate.”

Stoudemire’s former residence is a summer cottage compared to Ross’s home in Georgia, with four bedrooms and five-and-a-half bathrooms spread over 7,361 square feet.

He probably needs extra room for his sneakers.