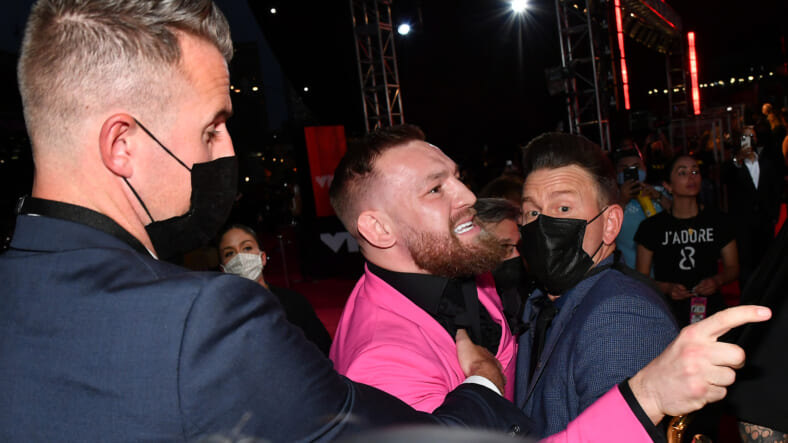 Sunday night’s 2021 MTV Video Music Awards Ceremony at the Barclays Center in Brooklyn was full of exciting entertainment news. About who won, what people wore, and who threw drinks at whom in a snarling rage.

Okay, there was only one report about that—a caught-on-camera red carpet scuffle featuring Machine Gun Kelly, with a scantily-clad Megan Fox on his arm. Naturally, in keeping with his rep for raging at Barclays, Conor McGregor was also involved.

Why is Conor trying to fight Machine Gun Kelly at the VMA awards. 😂😂😂😂 pic.twitter.com/MoN9qa9guU

To be fair, it isn’t 100 percent clear in images from photo services that McGregor is really snarling in rage. Unless, that is, you’ve seen the former UFC double champ at any pre-fight event, then it seems obvious the Irishman is pissed-off.

Conor McGregor throws a drink at MGK on the red carpet (via ig:laurademytrk) pic.twitter.com/H0naCNbMta

As for Machine Gun Kelly, it isn’t clear that he’s wearing any expression at all. You could make an argument for the rapper, singer, and songwriter being drunk on the fact he’s dating Megan Fox and she looks like that.

Between his head-turning date and ending up with a VMA award for Best Alternative Video, it’s hard to imagine MGK is too bothered by a still-hobbled, cane-wielding McGregor, still recovering from that gruesome leg injury he suffered in his loss to Dustin Poirier.

TMZ has more about the confrontation:

5:31 PM PT — Sources connected to the situation tell us Conor asked MGK for a photo, which Kelly denied … and that apparently escalated into him pushing Conor, whom we’re told stumbled back and spilled his drink.When he collected himself and whatever was left of his drink, our sources say Conor allegedly chucked the drink at Kelly … as well as Megan, whom we’re told was nearby.Their respective teams broke it up before things got really ugly — and Conor was given his walking cane back — something that had fallen to the ground during the scuffle…6:42 PM PT — A source close to Conor tells us the fighter wanted to say hello to MGK, stuck his hand out and started walking up to the singer. We’re told MGK said something — that Conor couldn’t hear — and MGK’s security pushed Conor away. Our source says Conor doesn’t understand what the issue was, and was surprised by how he was treated.

In other words, the biggest diva (or divo) at the VMAs was Conor McGregor.

It does appear that some kind of real dust-up occurred, but even with all the assembled media there, the story remained murky Monday morning, leading to people on the internet grabbing photos and videos from different angles, treating the non-fight like it was the JFK assassination.

V
Machine Gun Kelly and MMA star Conor McGregor get into squabble on red carpet of MTV VMAs… and it is MGK's lady Megan Fox who steps in before it turns into brawl
======https://t.co/kuEZvBZauk pic.twitter.com/Z1Tm8FzgPk

Machine Gun Kelly wasn’t forthcoming when asked about what happened.

McGregor, on the other hand, can be about as subtle as a sledgehammer, and he had a predictably colorful answer when questioned by an ET correspondent.

“Absolutely nothing,” McGregor said of the scuffle. “I don’t know. He showed up, and I don’t know. I don’t know the guy. Nothing happened with me, I only fight real fighters, people that actually fight, you know what I mean.

“I certainly don’t fight little Vanilla Ice boy rappers. I don’t even know the guy. I don’t know anything about him, except that he’s with Megan Fox,” McGregor added.

Prediction: Look for some kind of pay-per-view, “McGregor vs. MGK” MMA or boxing or thumb-wrestling event in the next six months or so.