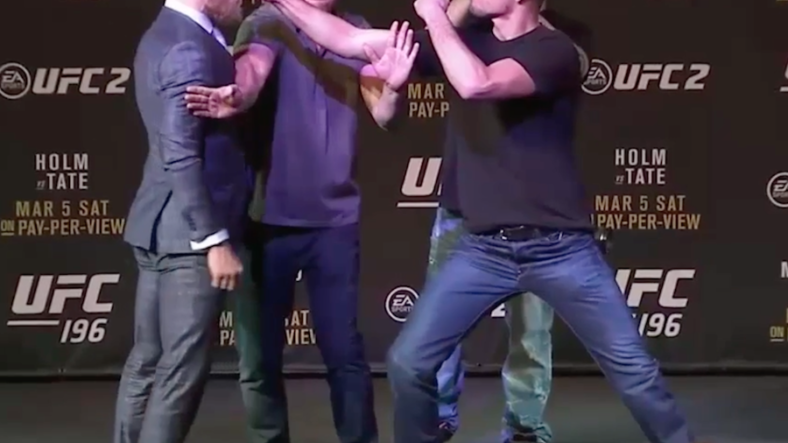 If last week’s hastily assembled press conference with Conor McGregor and Nate Diaz didn’t convince you of their seething hatred for one another, the near melee at Thursday’s UFC 196 presser surely will.

The fireworks came during the traditional face off, as the two fighters stared each other down with UFC president Dana White desperately trying to keep daylight between them. But he couldn’t keep Diaz’s fist from hovering around McGregor’s chin and McGregor from throwing a punch at said fist. The fuse was lit.

Watch closely and you’ll see Diaz’s brother and fellow UFC fighter Nick rush the stage along with Jake Shields, a former UFC fighter currently mixing it up in the World Series of Fighting. Eventually, a gaggle of bald dudes in tight tees restored order, but not before the animosity between McGregor and Diaz was ratcheted up just a little bit more.

Yes, scuffles like this are to be expected at pre-fight face offs. It’s a part of the UFC’s marketing strategy at this point. But that doesn’t mean these two fighters don’t truly despise each other. If you think there was anything inauthentic about this, just watch White in the moment when he thought that McGregor was going to jump over him to get to Diaz. He’s scared.