This guy never shuts up — and we love it. 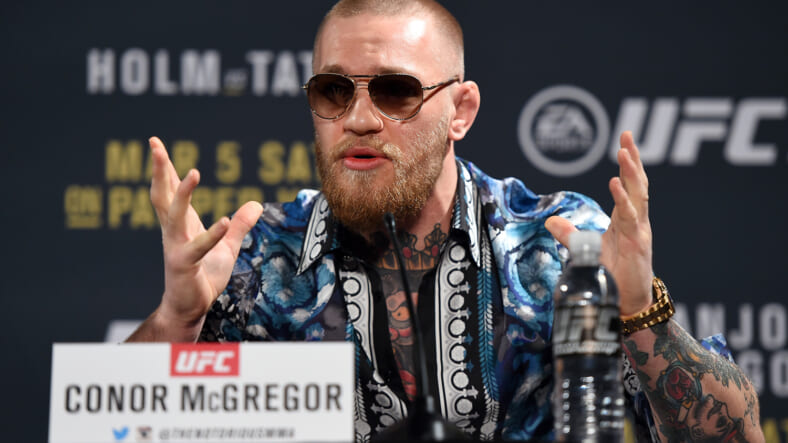 From now on, no one should refer to Conor McGregor as a fighter. It doesn’t come close to capturing his majesty.

The UFC’s featherweight champion is a performer, a full-fledged entertainer whose fame owes as much to his mouth as it does to his fists. At a Wednesday press conference to promote his March 5th fight with Rafael Dos Anjos at UFC 197, he made that clear once again.

“On March 5th I will behead Rafael Dos Anjos, I will drag his head through the streets of Rio de Janeiro through a parade of people. I imagine it will become a national holiday,” McGregor said from the stage, dressed like an extra from Miami Vice. Or, as he put it, dressed “like El Chapo.”

Bold move, taking style cues from a murderous drug lord, but McGregor has repeatedly shown that when it come to his pre-fight circumlocution, there are no sacred cows. Back in December, after he was asked how’d he after in a fight with Jesus, McGregor said he’d “whoop his ass.”

On Wednesday that comment came up again and it led to what might be McGregor’s greatest quote of all-time.

McGregor’s mouth was running non-stop at this presser. So, along with the brilliance there was some total nonsense. Like this:

Uh, it’s probably a good idea to leave the dude’s kids out of it. Especially when they’re named Gustavo and Rafael. But again, no sacred cows. And from McGregor’s perspective, it seemed to have its desired effect — getting into Dos Anjos’s head.

A self-admitted non talker of trash, Dos Anjos went against his better judgement and offered McGregor some of his own medicine. “I’m going to send this guy home sad, and I’m going to keep my belt” he said, proving that not everyone was bestowed with McGregor’s gift for gab.