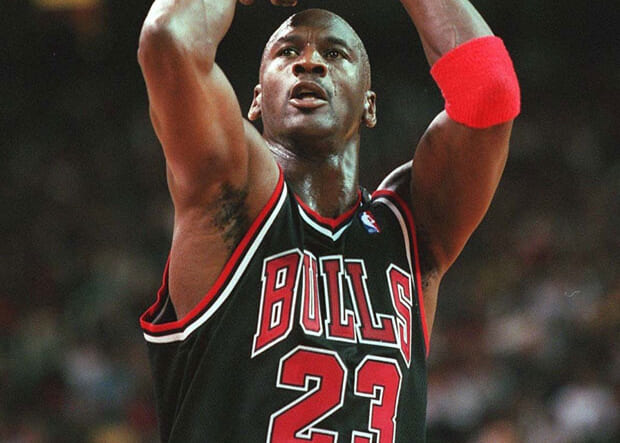 Trainer Tim Grover thinks so.(Photo: Alexander Hassenstein / Bongarts / Getty Images | Licensed to Alpha Media Group 2013)
Turning 50 years old is often times cause for nostalgia—especially for someone as accomplished as Michael Jordan.But with Jordan’s 50th birthday resulting in rampant comparisons between MJ and today’s NBA greats—particularly LeBron James— there have been some who have openly wondered what the former Bulls star could do in today’s game.
Legendary NBA trainer Tim Grover may have come through with the loftiest prediction yet. Grover, who worked with Jordan throughout his career, appeared on WFNZ in Charlotte on Tuesday and theorized that No. 23 could still average 20 points per game (transcription by Eric Schmoldt via Sports Radio Interviews):“He’d average 20. Yeah, he’d average 20. … Listen, would he be able to go out and get through an 82-game season? One thing people also [forget], he had no major injuries. … But yes, Father Time is undefeated. But again, there’s so much advancement out there … in anti-aging and so forth, so it is possible. I don’t think that he would come back unless he was 100 percent ready.”
Laugh if you want, but Grover is not alone. Los Angeles Lakers forward Antawn Jamison ventured to say Jordan could still average “10 or 11” points per game if he returned at age 50.The question, of course, starts with desire. We know from ESPN senior writer Wright Thompson’s brilliant profile on Jordan that he still religiously follows the game. And we also know that he’s still good enough to defeat Bobcats rookie Michael Kidd-Gilchrist at a game of one-on-one.Check out the rest of the article via our friends at Bleacher Report.