The most feared woman in MMA also called out Ronda Rousey—again. 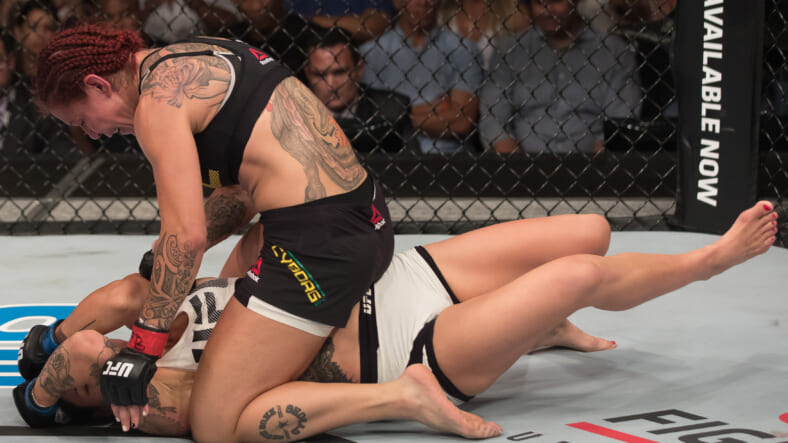 Cris Cyborg fought in the main event of Saturday’s UFC Fight Night 95, and even though her opponent hadn’t lost since 2012, anyone who though Lina Lansberg would challenge Cyborg was delusional. She is, quite simply, on a different level  than other female MMA fighters. And so, like clockwork, she came out and predictably demolished Lansberg, who was making her UFC debut.

Cyborg was like a hurricane, throwing fists and feet faster than Lansberg could say Ikea (she’s Swedish, so that joke works).

Only Ronda Rousey, at the height of her dizzying UFC success, seemed like she could compete with Cyborg. And given Rousey’s shocking loss to Holly Holm and subsequent layoff, her time as the scariest woman in the UFC is over. But Cyborg is clearly still thinking about her hated rival.

“I want Ronda to come back,” she told FOX Sports after the fight. “I think she should show people even when you lose, it’s not the end of the world. You cannot give up.”

Cyborg might have fought in the main event but UFC vet Roy “Big Country” Nelson made some news of his own earlier in the night. During his two-round win over Antonio “Bigfoot” Silva, Nelson set the record for time spent in the Octagon by a heavyweight. Over the course of his nine-fight UFC career, Nelson has spent just over three hours and seven minutes in the cage. And he’s got that impressive gut.

The most interesting moment of Nelson’s most recent bout came after it ended. Moments after Big John McCarthy ended it, Nelson kicked him. Or nudged him. More of a push, really. In any case, he made contact with McCarthy to register his anger at how long it took to end the fight.

“When I hit ‘Bigfoot’, I already knew I knocked him out with my first punch and then I got him one more time. In my head it was so slo-mo like I’m having a conversation with John going ‘hey man, how’s the weather over there?’. That’s what it felt like. I’m friends with ‘Bigfoot’ and he has a family, I don’t need to keep on punching him in his face,” he said at the post-fight press conference.

Nelson could face punishment from the UFC and The Brazilian Athletic Commission.