Here Are the Best Things You Missed from This Weekend

Channing Tatum’s got ‘eggcellent’ luck, we watch Amy and Tina kill it on SNL, and the NFL features a great photobomb. 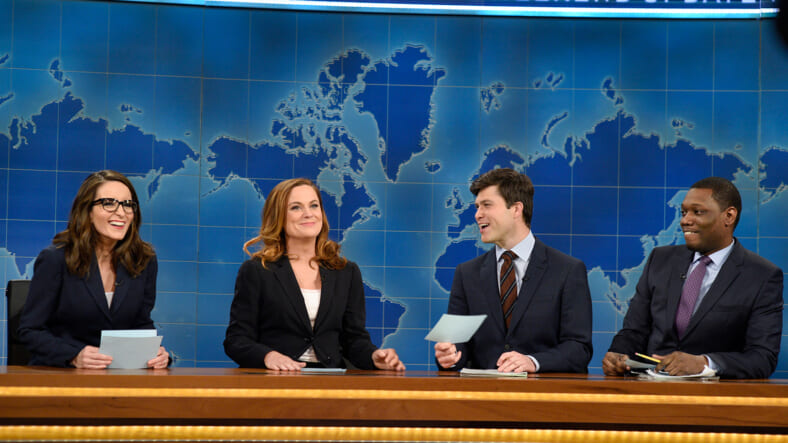 SNL’s ‘Second Wife’ ShenanigansIn arguably one of their funniest skits to date (no doubt due to the terrific hosting from Amy Poehler and Tina Fey), SNL subjected married men to shame by introducing them to their ‘second wives’ in a game show-type fashion. Despite claiming to be happily married, hosts Poehler and Fey continued to bring out younger and younger women for the guys, making light of men’s cheating nature, divorce, and other relationship issues. Not everyone was the biggest fan of the sketch, but it made us nostalgic for the SNL we used to know and love, and dynamic duo Amy and Tina should make appearances a lot more often.

Break It ‘Til You Make ItBecause the only way to promote The Hateful Eight is with western accents, Tonight Show host Jimmy Fallon took this as an opportunity to challenge Channing Tatum to a friendly game of ‘Egg Russian Roulette.’ In a game that Fallon has played multiple times, you would think he’d have picked up some strategy to egg smashing, but that’s doesn’t seem to be the case. Watch below, and see how Tatum holds up, plus how long you think it’ll be before Jimmy’s head turns scrambled.

Football PhotobombsIt’s clear in this interview that all Jets QB Ryan Fitzpatrick wanted to do was celebrate. While speaking with correspondent Tracy Wolfson, the two get interrupted by center Nick Mangold, who charges forward and let out a girlish laught at his teammate, only for Fitzpatrick to respond in a similar manner. After calming down a bit, the winning QB asks, “Is this live?” as if he doesn’t want the world to know he has the laugh of a 12-year old female. He shouldn’t be ashamed though; when your victory brings you closer to the playoffs, you can laugh however your heart desires.