Plus, Charlie Day stops by ‘Conan,’ and we got our first real look at a dark Danielle Panabaker on ‘The Flash.’ 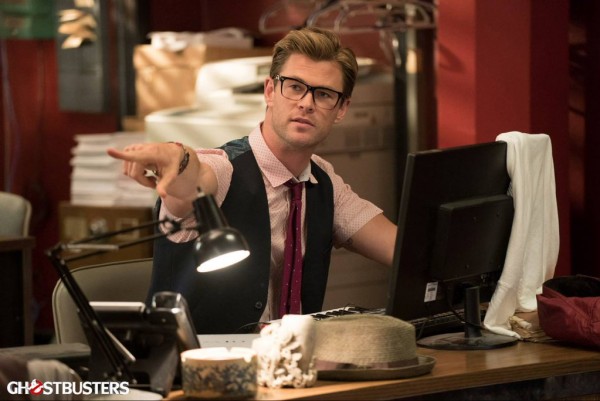 Who Ya Gonna Call? Thor, That’s WhoNo matter how hard he tries, Chris Hemsworth will forever be known to the public as Thor, God of Thunder and all-around behemoth of a man. That’s why when we got our first glimpse of him taking on the role of the Ghostbusters’ secretary, originated by Annie Potts, it was even better than we ever imagined. Set up at a desk in a salmon shirt, red tie, and nerd glasses, you can expect the bulging Australian actor’s take on the mousey character to be worlds apart from his other stronger, manlier roles (but in the best way possible). Director/co-writer Paul Feig has already switched things up with the all-female cast, so we’re confident the Norse god will have no trouble trading in his mjolnir for a pen.

Welcome to Earth-2The Flash has zoomed back into our lives following the winter hiatus, and it’s next week that we’ll finally feel that big chill we’ve been waiting for in the form of Danielle Panabaker‘s ‘Killer Frost’ persona. With Barry Allen’s (Grant Gustin) journey over to the other-worldly Earth-2, this provides the perfect opportunity to introduce Caitlin Snow’s villainous counterpart, as well as a chance to bring back Robbie Amell as her ‘smoking hot’ lover, Deathstorm. With only a handful of episodes left, expect the unexpected before season two of the hit series wraps in a few months.

How Charlie Day Almost Killed Danny DeVitoCharlie Day stopped by Conan to chat with the late night host about It’s Always Sunny‘s remarkable 11 seasons and the cast’s crazy antics over the last few years. During a recent attempt at an underwater scene, co-star Danny DeVito had to be weighed down due to his “buoyancy,” which necessitated a rescue by safety divers after he failed to rise back to the water’s surface like his fellow actors. “We almost killed him,” Day told Conan regarding the scene. “He went straight home after, I don’t blame him.” Listen to the Sunny actor explain it himself in the clip above.