Plus, Jimmy Fallon and Jake Gyllenhaal spit at eachother, and we learn why Grant Gustin wasn’t cast in Zack Snyder’s ‘Justice League.’ 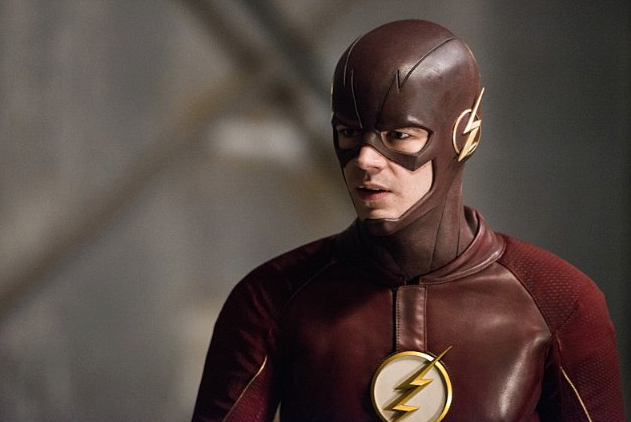 Han Solo’s Words of WisdomDisney has shifted their pursuit for a young Han Solo into high gear, with three names being thrown around to replace the role originated by Harrison Ford. While its unclear whether Alden Ehrenreich, Taron Egerton, or Jack Reynor will head off to a galaxy far, far away, the original man to blast away at Storm Troopers had some wise words for whomever is cast: don’t do it. “First it seems like everything’s going swimmingly, and you put in 25, 30 years, and then they just let you go,” Ford said during his surprise appearance on The Ellen DeGeneres Show. “And they show you the door and say, ‘We’re done with you, thanks very much.'” The 73-year old may be done with this billion-dollar franchise, but that doesn’t mean he won’t show up in other hit movies – like James Bond, perhaps? “I’d do that,” he said over the audience roar. Where can we buy our ticket?

Good Cop, Fake CopJimmy Fallon unearthed footage from Point Pleasant Police Department, an eighties TV show that he and guest Jake Gyllenhaal “starred on” together, with the 35-year old actor claiming it to be “his most intense role to date.” What The Tonight Show host actually pulls from the archive is essentially the two men in cop uniforms, spitting just about whatever they can get their hands on at each other, ranging from coffee (hopefully iced) to crisp apples (hopefully gala). The bit went on for almost eight minutes with the two barely keeping a straight face. Watch things get real, real messy in the clip above.

Zack Snyder Speaks Out About ‘The Flash’ CastingThe Flash is one of The CW’s top rated shows of all time with actor Grant Gustin praised for his portrayal of The Scarlet Speedster, so when news came of Ezra Miller’s casting in Zack Snyder’s standalone The Flash film, fans were a bit curious what inspired the shake-up. When speaking with The NY Daily News, the Batman v. Superman director mentioned Gustin was never actually on his list when considering who would take on the role. “I just don’t think it was a good fit,” Snyder said. “I’m very strict with this universe and I just don’t see a version where…that (tone is) not our world. Snyder’s honesty might come off as a harsh blow, but in reality, it would be hard for Grant to balance schedules for both the TV version and film version of The Flash, even if he actually had superpowers. No word as to how Ezra will do once he throws on the crimson costume, but in the meantime, you can watch Grant Gustin kick ass every Tuesday at 8PM on The CW.