The Daily Heat Index: You Need To See This Bikini-Ready Photo of Alexandra Daddario in ‘Baywatch’

Plus, Supergirl and The Flash unite in their first poster, and James Corden turns serious films into seriously inappropriate musicals. 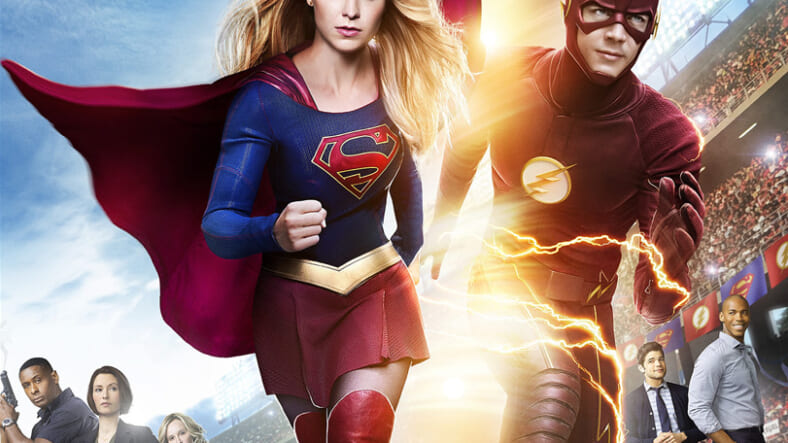 She takes #BAYWATCH to another level.. World fell in love with @alexannadaddario in #SanAndreas and I was so impressed by her chops and presence every day, that I had to have her “rep the squad” in our film. Just wait til you see her – and all our girls – kick ass and protect the bay. #GameOver #BaywatchBabes #CoverYourEyesBoys #BAYWATCH SUMMER 2017.

Alexandra Daddario Suits UpThanks to The Rock incredible Instagram game, we now have a first look at Baywatch star Alexandra Daddario all suited up for her slo-mo run down the beach. The 29-year old starlet, set to play Summer Quinn when the film hits theaters in 2017, rocks a red and blue swimsuit outfit next to her former San Andreas co-star that leaves little to the imagination. No word as to how involved Daddario will be in the film, but as long as she’s wearing this most of the time, you can bet it’ll be a box office success.

The Latest Superhero Crossover Gets a SynopsisWe geeked out hard when news of Supergirl (Melissa Benoist) and The Flash (Grant Gustin) crossing paths came to light, and now we finally know how two of the greatest superheroes will end up joining forces once their episode airs at the end of March. With a comic book inspired graphic poster, the appropriately titled ‘World’s Finest’ episode will follow the Scarlet Speedster as he travels to an alternative universe and arrives in the bustling National City. There, he’ll work together with Supergirl to get back home, but not before lending a hand to take down two formidable threats, Silver Banshee and Livewire. Can’t get much cooler than that.

Serious Movies Shift to Inappropriate MusicalsJames Corden used last night’s episode of The Late Late Show to turn some of the most serious Hollywood movies into lighthearted, music-filled laughfests. The late night host, alongside Martin Short and Will Arnett, took films like Goodfellas, The Revenant, and Gladiator and turned their otherwise dark and aggressive content upside down. Watch the clip above see if you’d still end up worshipping these R-rated favorites if they had a musical number here and there.