“He looks like if the meth from ‘Breaking Bad’ was a person.” 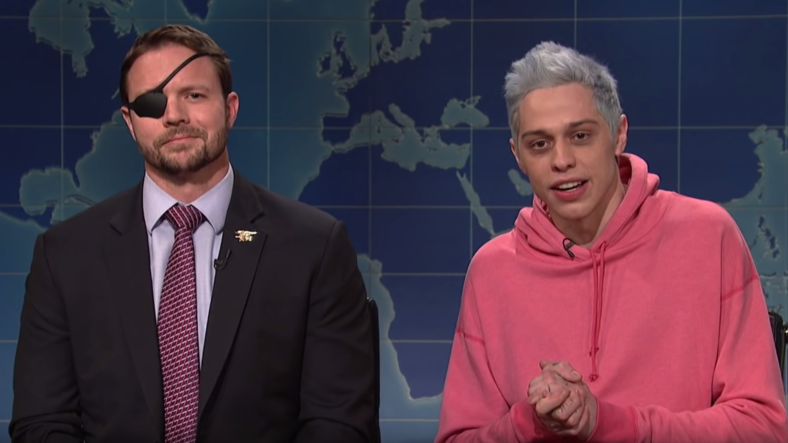 Davidson was deservedly roasted on social media. On last night’s “Weekend Update,” he apologized to Crenshaw in person—and while the apology was accepted, Crenshaw got in some shots of his own, every one of them funnier than the “hitman” joke.

Davidson was contrite and his apology seemed sincere. “If any good came of this,” he said, “it’s that for one day, the left and the right came together to agree on something—that I’m a dick.”

After a beat, Crenshaw rolled on set and said, “You think?”

The following exchange was both surprisingly funny and moving. Davidson told the audience how Crenshaw, a former Navy SEAL, wears his eyepatch due to injuries received from an IED in Afghanistan. He apologized and Crenshaw accepted, then the congressman-elect’s phone rang.

His ringtone? An Ariana Grande song.

This might have been the best revenge, but Davidson then offered Crenshaw a chance to rip on a photo of him, and he did.

“This is Pete Davidson. He looks like if the meth from Breaking Bad was a person.”

“He looks like a troll doll with a tapeworm.”

“Pete looks like Martin Short in The Santa Claus 3. By the way, one of these people was actually good on SNL.”

After perhaps three of the best jokes on the entire episode, Crenshaw and Davidson both seriously addressed forgiveness and understanding and the meaning of Veteran’s Day.

Crenshaw said that instead of “Thank you for your service,” Americans should say, “never forget.”

It’s no secret that Saturday Night Live‘s sharpest satire is from a progressive perspective—though President Donald Trump was even a guest host in the past, he’s regularly skewered by Alec Baldwin’s bizarre impersonation.

Crenshaw’s appearance was striking for setting partisan politics aside with good humor and using that to lead into addressing something important, like respect for veterans and for Veteran’s Day. In what was perhaps an otherwise unmemorable episode of SNL, it made for one of the most memorable moments of the season.