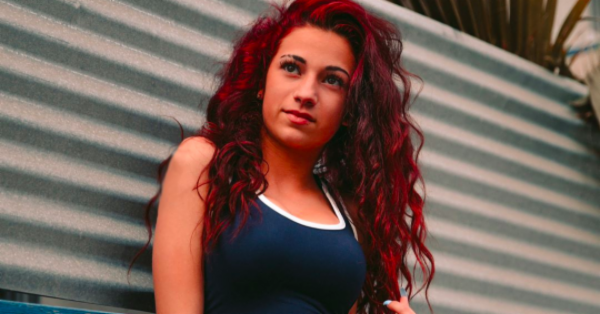 Generally known as her catchphrase in place of her actual name, “Cash Me Ousside” has spent the six months since seizing every opportunity her newfound fame has presented, including paid party appearances, reality TV deals, and nine million new social media friends. She even starred in a rap video, flashing her cash on top of a Rolls-Royce. Fitting, because chances are she’ll be a millionaire by the end of this year.

In an email interview with everyone’s favorite living meme, we got the inside scoop on the now-14-year-old’s high-priced celebrity appearances, the validity of that viral beat-down video, and how she really feels about Dr. Phil.

Take me to church ⛪️ 📸@goodboyshady

What’s it like being a social media star? Are you getting recognized everywhere? It’s different. Yeah, I get stopped pretty much everywhere for pictures and whatever. I don’t mind it accept [sic] for when people walk beside me and snap pics without permission. Just ask me.

What’s it like in school?I’m homeschooled with a private tutor.

Do you have plans to go back on Dr. Phil ever again?

Hell no. Ain’t nobody have time for that bald headed bitch. I just saw him on Jimmy Fallon talking all sorts of mess about my mom.

Have you heard from Oprah at all? No. I don’t think I’m the Oprah type.

Had to clear my circle up 👚@fashionnova ✌🏻👋🏻

What’s the craziest offer or appearance request you’ve received based on your newfound fame?I’ve gotten a couple $75K offers for birthday party and bar mitzvah appearances overseas. The timing just didn’t work out with my court stuff.

Have you met any celebrities or famous athletes? Have any tried to DM you? Yeah, a few. Not gonna put they names out there like that though.

There’s a viral video floating around in which it appears that you’re getting beat up, but you told TMZ that it’s definitely not you. Can you elaborate on that incident at all? I don’t know anything about it cause it wasn’t me.

Do you have any regrets about your appearance on Dr. Phil?No regrets.

What are your plans for the immediate future? What do you want to do when you’re an adult? I’m gonna just keep riding this wave and see what comes of it.

Is there anything surprising that you want people to know about you that hasn’t been covered in the media yet?My favorite movie is House of Wax.