‘Daredevil’ Season 2 Is an Electrifying Fight of Right vs. Wrong

This season, the enemy is within. 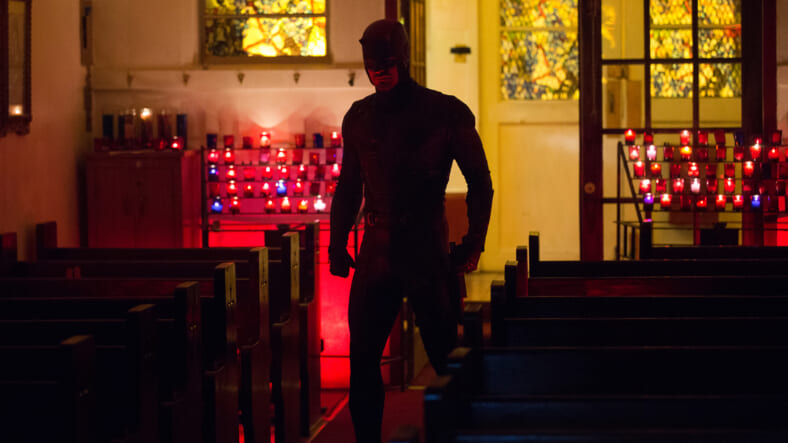 For all the enemies Matt Murdock battles, Netflix’s Daredevil has never shied away from making it clear that the biggest monsters might just reside within him. But if season one was content with keeping Murdock’s turmoil internal, season two brings that battle to the foreground as he squares off with the Punisher, Elektra, and perhaps the most vexing villain of all: the ever changing justifiability of his own actions.

With a Vincent D’Onofrio-sized hole to fill after season one saw Murdock (an ever-effective Charlie Cox) dispatch of underground crime boss Wilson Fisk, along with new showrunners, Daredevil was treading on unstable territory as it headed into its fast-tracked second season. Fans needn’t worry. Under the masterful helming of Doug Petrie and Marco Ramirez, the series continues just as relentlessly as the first season did, with little of the heavy-handed eventual softening of our protagonist that’s usually par for the course with such fare. Indeed, Murdock is still continuing his band of take-no-prisoners vigilantism in Hell’s Kitchen, though this season, it’s his take-no-prisoners (or, well, kill no prisoners) attitude that serves as his potential undoing.

The first of Murdock’s foils is Frank Castle (The Punisher), a self-appointed judge, jury, and executioner in Hell’s Kitchen, willing to do what Murdock isn’t – kill – to keep the streets safe. Unlike Murdock, the Punisher doesn’t believe in second chances, especially in the wake of the crime vacuum threatening to envelop Hell’s Kitchen since the Fisk’s toppling. Continuing with season one’s tradition of pairing the show’s fight scenes (still as spectacular as ever) with existential angst, Murdock and the Punisher become locked in an ideological battle of wills over just how safe Hell’s Kitchen is, given Murdock’s strict refusal to kill the men he fights. What could have been summarized into one story arc instead manifests itself into a half-series long battle between the Punisher’s id and Murdock’s super ego — one that’s not wholly dissimilar from the fight Murdock is grappling with in church regularly.

We’ve seen the Punisher three times before on screen, but none of those previous iterations had The Walking Dead’s Jon Bernthal stepping into the role. Bernthal has never been afraid of walking on the knife’s edge of the dark side; routinely adding a layer of nuanced moral complexity to characters that easily could have been played as straight, maniacal sociopaths. As the Punisher, it’s not Bernthal’s ability to portray bloodlust that stands out, it’s his ability to make us question our own moral compass as he does so. The Punisher may appear ruthless to Murdock, but the questions he poses during those expository fight scenes are ones Murdock has to deal with on a daily basis.

Murdock’s squaring off with former love interest Elektra also makes for excellent television; Cox’s chemistry with Elodie Yung is irrepressible (though his chemistry with anyone is pretty much irrepressible). Unlike Murdock, Elektra grapples with little emotional turmoil; her compass is set firmly pointing northward to her own best interests. But in the wake of the many little monsters scurrying around Hell’s Kitchen that go bump in the night, and no clear path on how to best handle them, can you blame her? And does doing what she does for outward gain make her any different than Murdock doing what he does primarily to assuage his own guilt?

Characters in Marvel’s cinematic universe tend to be either glib, charming, and guaranteed to win or pervasively dark. There is no middle ground. New York could be minutes away from blowing up, and the quippy one-liners traded between Iron Man and Captain America will have sealed the fate of the battle long before the shooting even begins. But the darker offerings – Daredevil, Jessica Jones – are where things start to get interesting, and where characters start dealing with what lurks in their own shadows.

The second season of Daredevil shines a light, both metaphorically and, thanks to new cinematography, literally, on the fight happening in those shadows, and drags it to the foreground. While the episode format may have gone a bit procedural, the bigger questions are far less readily solvable, even for a superhero like Murdock. Which is what makes the second season of Daredevil so imminently fascinating: who do you root for, when there’s a good chance everyone could lose?