We’re getting a ‘steadier dose’ of Daryl. 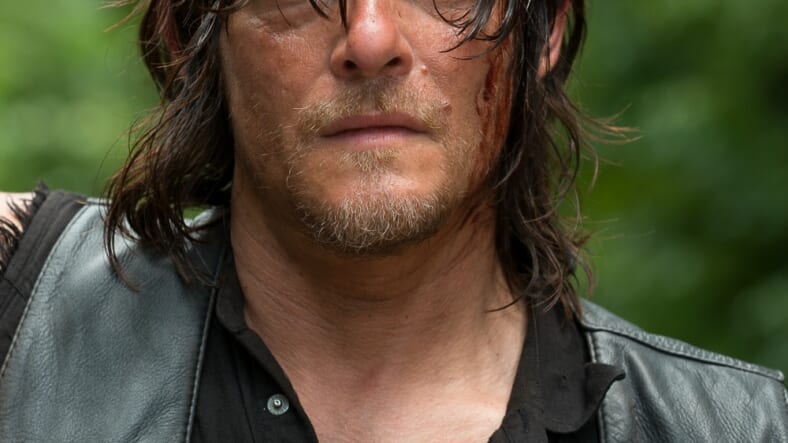 What happened to Daryl Dixon? Despite a first half of The Walking Dead‘s sixth season packed with action and bloodshed, our favorite crossbow-wielding biker was strangely absent from the Alexandria survivors’ battle with the zombie heard and attacks by the Wolves, left to draw away a wave of zombies and, in the mid-season finale, make first contact with the dreaded Negan’s people.If you’ve been missing your regular dose of Daryl — or worried that his new biker show may distract him from his zombie-killing duties — you’re in luck. Actor Norman Reedus revealed in an interview with Entertainment Weekly that we’ll be seeing a ‘steadier dose’ of the beloved bowman in the back half of the season:

We only really got one really big dose of Daryl in the first of the season there in episode 606. Was that difficult to be on the sidelines a bit while all that other stuff in Alexandria and with Glenn was going on?Well, I know the story we’re trying to tell up to a certain extent, and there are a lot of characters, and I trust [showrunner Scott Gimple’s] writing, and I trust his vision for where we’re going. Yeah, it’s a little hard to sit on the sidelines. Days I didn’t work, I’d go to the set and just watch other people work, but it’s definitely difficult just because I miss everybody and I love doing that job, so that makes it a little hard.But I do trust Scott’s vision, where he’s going, and I think he’s a great storyteller. So I’m backing him and everything that he’s doing. I like watching the other actors work, but yeah, it’s a little hard. I would call people up and be like, “Hey, how did it go today?” So it’s a little difficult, but it’s definitely a different drive in the second half.So we’re going to get more Daryl in the back half?Yeah, we’ll definitely have a steadier dose. I look at what they’re doing, and I look at the storylines, and they all completely make sense to me.

God only knows what those storylines hold: With the introduction of Negan, the series is bound for a brutal turn, and one major character is sure to bite the dust. After the cocktease that was Glenn’s purported dismemberment in the first half of the season, it’s unlikely that showrunners would save him simply to kill him off in the same horrible way as in the comics. If anything, Reedus’ interview is an implicit admission that, yes, Daryl is safe for now — and he’ll be back and badder than ever when The Walking Dead returns on February 14th.