“I shouldn’t say this, but his allegations were the only ones that made me laugh.” 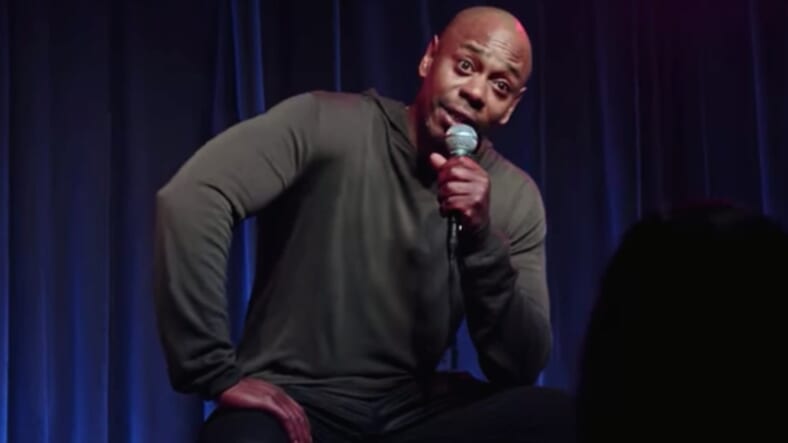 “Charlie Rose! Who’s next? Captain Kangaroo?,” Chappelle joked. “Louis was like the turning point. All these allegations were terrible — I shouldn’t say this — but his allegations were the only ones that made me laugh.”

“When you think about it, he’s jerking off — he’s surprising people. … I picture all the comics in comedy reading it like, ‘Word!’ It’s terrible, I’m sorry ladies, you’re right. At the same time, Jesus Christ, they took everything from Louis. It might be disproportionate, I can’t tell. This is where it’s hard to be, man.”

“One lady said, ‘Louis C.K. masturbated in front of me, ruined my comedy dreams. Word? Well, then I dare say, madam, you may have never had a dream,” Chappelle said. “Come on man, that’s a brittle spirit. That is a brittle-ass spirit, that is too much, this grown-ass woman.

“You think if Louis C.K. jerked off in front of Dr. [Martin Luther] King, he’d be like, ‘I can’t continue this movement? I’m sorry, but the freedom of black people must be stopped. I didn’t know this n—- was going to pull his dick out and jerk off like this. I thought we were going to get a couple of drinks and chill.’ Show business is just harder than that — them women sounded like, I hate to say it, they sounded weak.

“I’ve got to tell you, Harvey Weinstein is probably the first person that I’ve ever looked at a photograph of and said, ‘Yeah, he rapes,'” Chappelle said.

“I’m not sure this motherfucker has a choice. Not a handsome man. A lot of meat and extra skin on his face. He’s ugly. The sad part is, he’s done so well in life, he probably doesn’t know he’s ugly. When you’re good-looking, everybody will tell you. … when you’re ugly, you’ve got to figure that shit out for yourself.”

“If it was Brad Pitt doing that shit, you wouldn’t have heard a peep. The girl would just come back down, like, ‘I got the part.’ Yuck! Yet, it is important that I acknowledge, ladies, you are absolutely right.”

About how Hollywood can grapple with rampant sexual harassment and assault allegations, Chappelle offered up South Africa as an unexpected example.

“What this city really needs, without irony, I’ll say this: the cure for L.A. is in South Africa. You motherfuckers need truth and reconciliation with one another,” he said.

“The end of apartheid should have been a f—ing bloodbath by any metric in human history, and it wasn’t. The only reason it wasn’t is because Desmond Tutu and [Nelson] Mandela and all these guys figured out that if a system is corrupt, then the people who adhere to the system, and are incentivized by that system, are not criminals.

They are victims. The system itself must be tried. But because of how the system works, it’s so compartmentalized as far as information, the only way we can figure out what the system is, is if everyone says what they did. Tell them how you participated.”

Chappelle then suggested men like Ben Affleck should be spared ire after attempting to speak out, only to be faced with accusations of complicity and sexual harassment allegations of their own.

“Because men want to help, they’re just scared. Ben Affleck tried to help. ‘Hey, what happened to these ladies is disgusting.’ ‘Oh, n—-, you grabbed a titty in ’95.’ All right, fellas, I’m out. Fuck that, I ain’t helping.’ I just want to help. I want to be a good guy.”

Watch all of The Bird Revelation, now on Netflix.