Dave Chappelle Says Donald Trump Is The ‘Most Gangsta Candidate Ever’

He isn’t thrilled about Hillary Clinton, either. 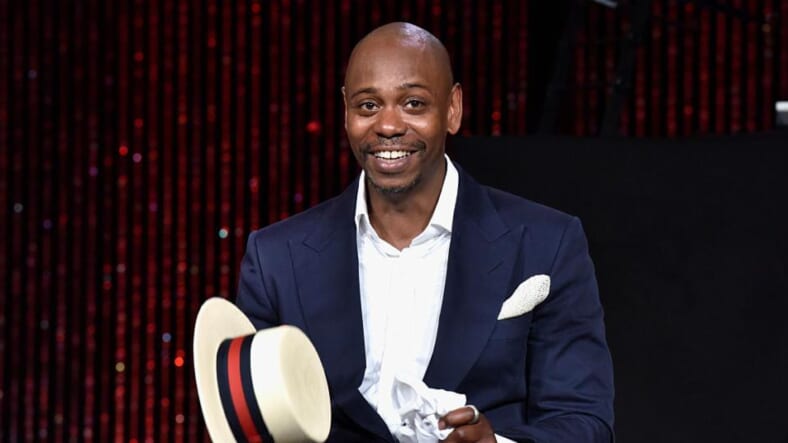 Dave Chappelle knows how to do a comeback. First we learned he will host Saturday Night Live on November 12. That’s a big deal because he’s never hosted SNL before, and aside from stand-up gigs, he’s been laying relatively low. Then Friday, during a set at New York’s The Cutting Room comedy club, Chappelle resurrected his old image as an unpredictable comedian who isn’t interested in saying what others may want to hear—a guy who always has a surprise or two up his sleeve. In this case, he expressed some decidedly political thoughts which won’t make any of his left-leaning fans happy.

Dave Chappelle is not into Democratic nominee Hillary Clinton, reports the Observer. Chappelle brought up the Access Hollywood video from the early 2000’s in which Donald Trump spoke explicitly about grabbing women “right in the pussy.” As far as Chappelle is concerned, Clinton pulled some strings:

He was particularly agitated about what he believes was Clinton’s role in leaking a surreptitiously recorded conversation between Republican nominee Donald J. Trump and TV personality Billy Bush. “What I heard on that tape was gross,” Chappelle said. “But the way I got to hear it was even more gross. You know that came directly from Hillary.” He stated this had put him off a candidate he had already known was “not right.” He likened voting for her to a hypothetical situation of actress Halle Berry breaking wind in his face during sexual relations. “I’m still going to go for it,” he said. “But I wish she hadn’t done that thing.”

Chappelle also said that Clinton is “going to be on a coin someday,” even though “her behavior has not been coin-worthy.”

Regarding Republican nominee Donald Trump, Observer reported Chappelle seemed impressed by Trump’s resilience and brashness. He referenced Trump’s performance in a debate moderated by journalists Martha Raddatz and Anderson Cooper. “Something about this was backward. A gay white man and a white woman asking a multi-billionaire how he knows the system is rigged and insisting it’s not,” he reportedly said, “Does that sound right to you? It didn’t seem right to me. And here’s how you know Trump is the most gangsta candidate ever. They asked him how he knows the system is rigged and he said, ‘Because I take advantage of it.’ He may as well have flashed his membership card for the Illuminati right then.”

On the whole it sounded as if Chappelle may have indeed voted for Clinton, but he wanted it clear that he was holding his nose the entire time.

Whatever he says, there’s no doubt Dave Chappelle is going to keep it real, no matter who’s in the audience.