Dave Chappelle Is Reportedly Still Telling Transphobic Jokes, Now Getting Roasted For Not Being ‘Woke’ Enough

The edgy comedian’s run of NYC shows is off to a rocky start. 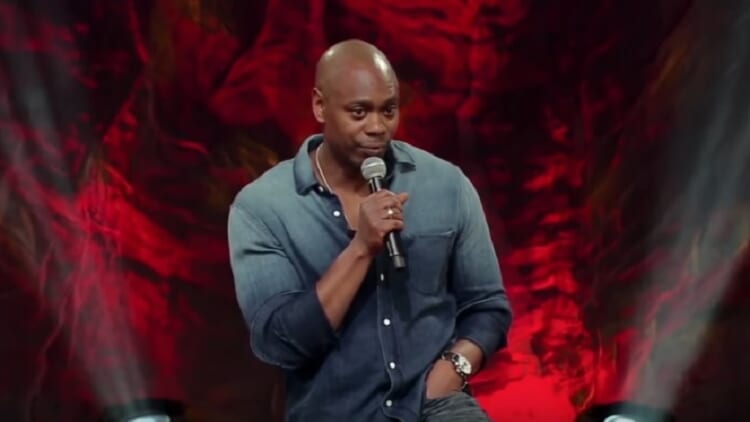 Even though he is one of the most gifted comedians to ever grab a mic, Dave Chappelle may have missed some things in his time out of the public eye. Certain joke subjects are much more hot-button issues than they were in the heyday of Chappelle’s Show. Especially jokes about members of the LGBTQ community.

Chappelle just began a run of 16 shows at New York City’s Radio City Music Hall, and in his first set he rolled out some jokes that almost immediately caused controversy.

The New York Magazine review of his first show gives a pretty good taste of why some are taking him to task:

…[He] told a story about receiving a fan letter that derided his trans jokes, to which he replied, “A weird thing happened to me in this moment — it honestly made me feel bad that I made somebody else feel bad.” That was, however, just misdirection for another series of trans jokes. He went on to say he didn’t know what joke they were referring to, because he has so many jokes about trans people, but he thinks it was probably “this joke I’m about to tell you right now.” Which went like this: “I read in the paper that Caitlyn Jenner was contemplating posing nude in an upcoming issue of Sports Illustrated. And I knew it was politically incorrect to say, so I figured I’d just say it for everybody — yuck. Fuck, man, I just want to read some stats, like why are you cramming man-pussy in the middle of the sports page like that?” ….Chappelle went back to investigating his feelings toward transgender people, saying he doesn’t understand them, but he doesn’t believe that “disqualifies them from being a human being that deserves a life with dignity and happiness and respect,” which got a lot of applause (it was a real clap-ready audience). He then tried to make a fairly complicated point about his own frustration with “all this talk about how they feel inside,” because “since when has America given a fuck about how anyone feels inside?” He ended by arguing that sometimes he thinks “the only reason all of us are talking about transgenders is because white men want to do it. If it was just blacks and Mexican like, ‘Hey, y’all, we feel like girls inside.’ They’d be like, ‘Shut up, nigger, no one asked how you felt.’”

Chappelle‘s jokes link back to a long-time theme in his comedy—addressing differing societal standards for white people and people of color. Underlying that, however, seems to be the assumption there are few trans people of color.

But Jezebel points out that of 22 trans homicide victims in 2016, more than half were African Americans.

Social media reactions to Chappelle’s jokes have been mixed. Many tweets are supportive and indicate a belief Chappelle has been willfully misunderstood.

if you read the jokes told, none of them are transphobic in nature. they are standard Dave Chappelle jokes that he's always told

Others expressed disappointment and anger.

classic example of punching up vs punching down. chappelle & many other comedians continue to use trans ppl for tired,old&boring punch lines

The question will be whether he takes a new awareness of the feelings of a community long marginalized regardless of their color to heart and addresses it—or just doubles down by adding more trans jokes to his set.

Chappelle’s unpredictable and a born rebel, so we’ll just have to wait and see.