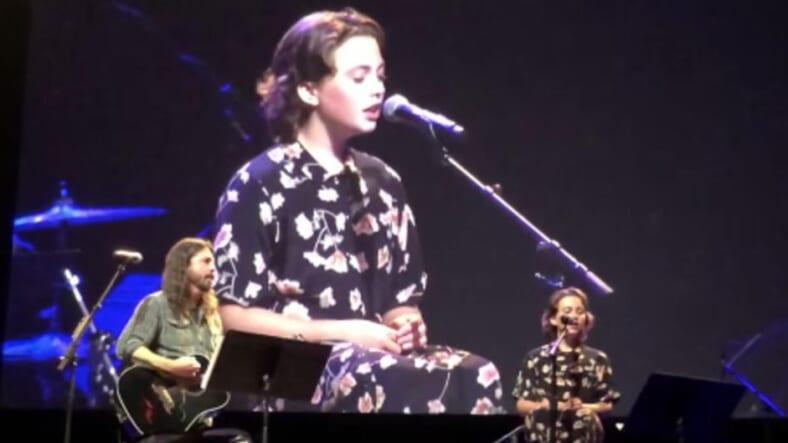 12-year-old Violet Grohl sang a stunning cover of Adele’s “When We Were Young” while her rock star father accompanied on acoustic guitar at a benefit concert for the UCSF Benioff Children’s Hospital in Oakland this weekend.

The preteen expertly emulated the British singer-songwriter’s powerhouse voice as she belted out the moody 25 single with ease. Compare it to Adele’s version below:

The Grohl family’s set didn’t end there! Per Rolling Stone,

Following the Adele cover, Grohl’s younger daughter Harper came to the stage to play drums and Violet sang backup when their father played Foo Fighters‘ “The Sky Is a Neighborhood.” The set concluded with Violet on lead vocals and Harper on drums as the Grohls covered Queen’s “We Will Rock You.” Grohl’s daughters previously appeared in the Foo Fighters’ “The Sky Is a Neighborhood” video.

If the Foo Fighter frontman’s kids want to follow in their father’s musical footsteps, they’re clearly on the right track. Watch Harper, Violet and Dave play the bands’ hit single “The Sky Is a Neighborhood” below: