10-year-old Nandi Bushell challenged the Foo Fighters rocker to a “drum-off,” and Grohl answered her challenge in the coolest way possible. 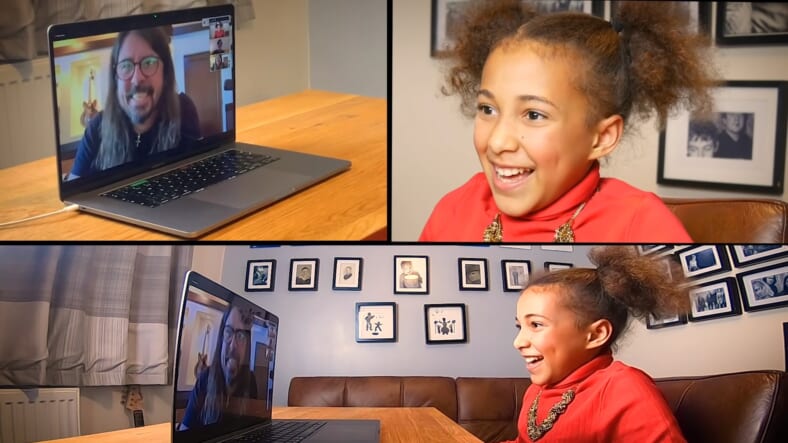 After months of friendly online drum duels between Foo Fighters frontman Dave Grohl and pint-sized musical prodigy Nandi Bushell, the 10-year-old YouTube sensation came face-to-face with the the 51-year-old rock star in what’s quite possibly the world’s most heartwarming meet-and-greet.

A 10-minute digital interview that was facilitated by the New York Times was recently uploaded to Bushell’s channel. The child musician from Ipswich, England kicks it off with a nervous giggle. “Hello, Mr. Grohl. It’s AMAZING to meet you!”

Grohl continued to compliment the outstanding little rocker, saying, “I just realized I’ll never be as good as you, so I quit.” When Nandi replied, “Practice, practice, practice,” Grohl smiled, threw up his arms and approvingly shouted, “Yes!”

The Los Angeles Times notes that the challenge began when Bushell showcased her blistering chops with a cover of the Foo Fighters’ classic 1997 hit “Everlong” prefaced with the words, “Dave Grohl, I challenge you to a drum-off!”

He responded in a big way. While it’s not necessarily a surprise that man who’s been nicknamed “Nice Guy Grohl” for being incredibly kind to fans would accept, the Foo Fighter went above and beyond by going round for round with Bushell in a serious of viral drum battle videos. Most recently, the two penned original songs in each other’s honor.

The sticks are now back in Grohl’s hands, so to speak, and he’s not backing down.

“I had an idea for how to respond to your last song, but I haven’t done it yet,” he told Bushell during their interview. “It’s a really good idea. I don’t want to give it away.”

Later on, Bushell ecstatically accepted an invitation to perform alongside the Foo Fighters at their next gig in her country and collaborate with Grohl on their own song.

“When the Foo Fighters finally come back to the U.K., do you think you would get up onstage and jam with us?” Grohl asked. “It has to be at the end of the set cause you’re gonna steal the show. Or we should make a song together.”

Bushell, who began posting drum covers to YouTube at age 6, has already built a stacked resume including commercials, a jam session with Lenny Kravitz at London’s O2 arena, and endorsements from Ludwig, Zildjian, Fender, Roland and Vic Firth, plus nearly 300,000 followers across YouTube and Instagram.

“Meeting Mr. Grohl was one of the best experiences of my life!” Bushell wrote in the interview’s video description.

“Dave Grohl is so awesome, kind and friendly! I can’t believe he wants to write a song with me and asked me to perform on stage with the @FooFighters! How EPIC is that! I can’t wait to see what Mr. Grohl is planning next.”