David Bowie Was Almost in ‘Lord of the Rings’

Actor Dominic Monaghan spills about the time he saw Bowie leaving an audition. 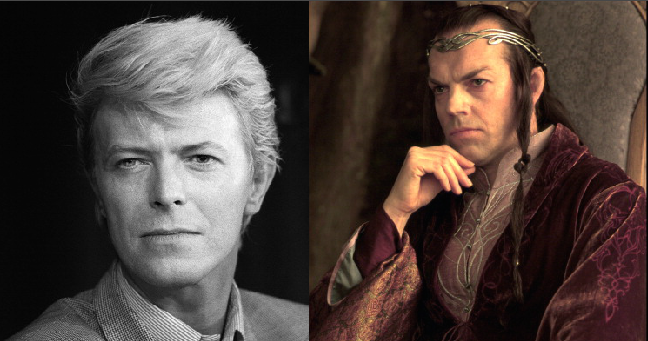 When I was 13 years old, I had a calendar hanging in my bedroom in which every month featured a different picture of Aragorn from Lord of the Rings. In fact, I wildly credit Viggo Mortensen in that movie for first making me aware of my sexuality. I was so wholly obsessed with the books and the movies that, to this day, whenever I hear anything about J.R.R. Tolkien’s books or Peter Jackson’s movie adaptation of the LOTR trilogy, I feel a familiar stirring in my heart (and my loins — okay, mostly my loins).

In a recent interview with The Huffington Post, Monaghan shared a story about auditioning for Lord of the Rings and seeing none other than David Bowie reading for a part in the movie.

“I was at the Hubbard’s, which is a pretty notorious casting agency office in London, doing an audition for ‘Lord of the Rings,’ and when it ended I went over and talked to John Hubbard, who was running the audition, and he said, ‘Hey, it went really well. You should wait around for 5 or 10 mins. We’ll give you some feedback,” He continued, “I thought, ‘Oh, OK, cool, and I sat in the reception office. As I was reading a magazine waiting, David Bowie came in and signed his little list and went in. And I’m assuming he read for Gandalf. I can’t think of anything else he would’ve read for. He may have read for something else, but I’m a huge David Bowie fan, and I was lucky enough to know his son now so just seeing him in person was pretty special to me.”

However, rumors have been floating around that Bowie wasn’t reading for Gandalf, but for the role of the elf Elrond, son of Eärendil and Elwing, great-grandson of Lúthien, and Lord of Rivendell. Hugo Weaving eventually got the part and played it spectacularly, but Bowie had such an otherworldly vibe that it’s not surprising that he may have auditioned for it; he was supposedly turned down for being too famous for the role. Which is probably for the best, as my teenage brain would’ve exploded at that possibility.

Tags: And My Axe David Bowie Entertainment J.R.R. Tolkien Lord Of The Rings movies Music You Have My Sword