Are you caught up yet? 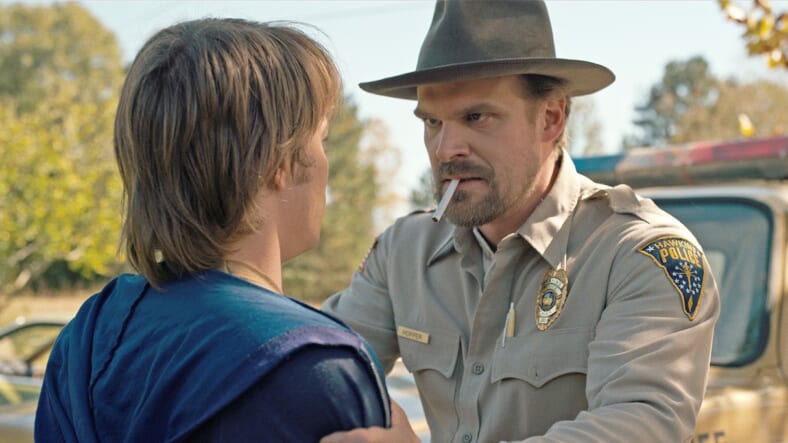 Last January, as protesters stormed airports around the country to rally against the White House-issued travel ban, David Harbour delivered an impassioned speech during the SAG Awards in Los Angeles. The cast of the sleeper Netflix hit Stranger Things was onstage accepting the award for outstanding performance by an ensemble in a drama series. It was just days after the ban took effect, and Harbour felt that attending an awards show was kind of frivolous, all things considered. After costar Winona Ryder handed him the bulky statue, Harbour, who plays troubled small-town police chief Jim Hopper in the show, took the mic.

“In light of all that’s going on in the world today, it’s difficult to celebrate the already celebrated Stranger Things,” Harbour said, his voice forceful. “But this award from you, who take your craft seriously and earnestly believe, like me, that great acting can change the world, is a call to arms from our fellow craftsmen and -women to go deeper, and through our art to battle against fear, self-centeredness, and exclusivity…by revealing intimate truths that serve as a forceful reminder to folks that when they feel broken and afraid and tired, they are not alone. We are united in that we are all human beings and we are all together on this horrible, painful, joyous, exciting, and mysterious ride that is being alive.”

The audience stood and roared, and in the days that followed the speech went viral, viewed over two million times on YouTube. It wasn’t political, Harbour insists, but instead a cultural plea. He was asking his peers: What kinds of stories do we want to tell? What kind of world do we want to reflect on-screen? “If we can make little ripples in the pond in certain directions,” Harbour says today, as the show’s much-anticipated second season begins streaming, “maybe those ripples can somehow effect social change.”

Harbour has been a workingman’s actor for more than two decades, and with Stranger Things, the 42-year-old has finally found the kinds of stories he wants to tell. He was an underdog choice to emerge as the breakout star in the nostalgic series that evokes Steven Spielberg’s dreamlike films from the eighties. But then again, Stranger Things is an underdog story itself.

The project couldn’t have come at a better time for the New York-based actor. He received the script just after NBC canceled State of Affairs, in which Harbour costarred. He was in a dark mood and didn’t think he’d land the part—he figured Netflix would be looking for more star power. It’s not as though Harbour hadn’t experienced career success before Stranger Things—he’d had roles in art house fare and blockbusters alike, including Brokeback Mountain, Quantum of Solace, Black Mass, Revolutionary Road, and End of Watch, and he’d been nominated for a Tony in 2005 for Who’s Afraid of Virginia Woolf?—but he had never broken out as a leading man.

Harbour says he was in a “deeply cynical place about my abilities and telling meaningful stories in the Hollywood environment.” He later mused to the Los Angeles Times about quitting acting, a comment he now admits was a slight exaggeration. “For about five or six years I was kind of like the ‘other cop’ in something, or I was the best friend, or the killer.” He felt like another cog in the big entertainment machine; at one point he tried to get out of a part in a big-budget movie to do a Shakespeare play. “I was like, ‘Look, I’ll come when they call and when I need to make some rent, but I’m not going to throw my heart to really invest myself in this industry.’ And then Stranger Things came along and I met these guys, the Duffer brothers, and that all turned around completely.”

The Duffer brothers—33-year-old North Carolina natives Matt and Ross, who had previously written and directed the small horror film Hidden—had developed an idea about a show focused around mysterious occurrences in the fictional Indiana town of Hawkins in 1983. The script dripped with eighties longing, inspired by the works of Stephen King and John Carpenter as well as Spielberg.

It reminded Harbour of the unbridled joy he experienced going to the cinema as a child in the eighties. He auditioned for the role of Hopper, who is investigating the mysterious disappearance of a young boy. On paper, the character reminded him of Roy Scheider’s police chief, Martin Brody, in Jaws, or Nick Nolte in 48 Hrs., with just a dash of Indiana Jones thrown in. Harbour wanted to craft Hopper as a wounded man—flawed, not a traditional barrel-chested hero. He wanted Hopper to have a paunch, a receding hairline, and the look of a perpetual hangover. Hopper likes to smoke cigarettes and punch people.

The portrayal was a risk—how would audiences respond to a hero who could barely get out of bed in the morning?—but it paid off. Hopper is relatable, and he becomes a hero for our time: a man who doesn’t know how to figure it out, figuring it out. Surround him with a group of charismatic kids and you have a collection of underdogs that everyone could root for. And just about everyone did: Stranger Things is both a critical and audience darling and a multiple award winner, and Harbour himself was nominated for an Emmy.
“

One of the great things about Stranger Things is that you take these people that are really incapable and really a mess and they’re ordinary people, and then they go and do an extraordinary action,” Harbour says. “I want people to feel like, ‘Look, I’m just a schlub like you.’ Because I am—I’m not in perfect shape, I’m not in perfect lighting, I’m not looking great. That’s the thing when you watch Hopper—you’re like, ‘This is the dude that’s going to kill the monster? I could totally be that dude. I sleep late…I cannot deal with these situations.’ And I think that’s really fun as an audience member, to truly identify more with the lead character, as opposed to being in awe of them and being like, ‘Whoa, they do so many sit-ups.'”

Speaking to Harbour, it’s clear that Stranger Things is much more to him than simply a vehicle for his own success. He displays a deep affection for his character, and for the show itself. Stranger Things means something to Harbour; he binge-watched the first season, just like everyone else.

But Stranger Things has undeniably opened doors. Harbour is set to take over the titular role in the Hellboy franchise, and the show has given him a platform to influence people and the culture—hence his SAG speech. Not that he’s totally content—”My divine dissatisfaction as the artist…never ends”—but he’s embracing the challenges offered by his newfound success. “I really want to tell stories that I believe in, like Stranger Things, and let’s see if people want to watch that. And let’s see if my voice has that kind of resonance.”