“I hadn’t seen a movie in ten years where the driving was real.” 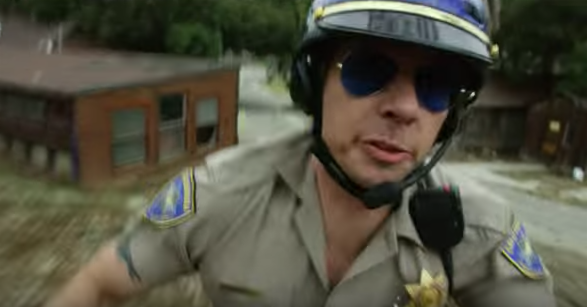 “Ride or die.” It is CHiPs writer/director/star Dax Shepard’s mantra, a recognition of a philosophy regarding the gas pedal as a good thing, the brake as a necessary evil, and the clutch as a key ingredient to the blessed internal combustion sacrament.

“I very much had the fantasy of being a race car driver before anything else,” Shepard explained to Maxim. “But I noticed there weren’t that many race car drivers who parlayed that into successful acting careers. The other direction could happen any time.”

Bae is ride or die. @kristenanniebell

“Ride or die” is a mantra born of an irresistible attraction to motor vehicles and passed along to his indulgent wife, Kristen Bell. She good-humoredly drags herself and the couple’s two daughters along for Shepard’s holiday weekend desert races in his Tatum sand rail, even though they occur on Halloween, Thanksgiving, New Year’s, President’s Day and Easter weekends.

Shepard is a true, Detroit-born and raised car (and motorcycle) guy who has had enough of absurd computer-generated car chase scenes in movies, which is one reason he revived the California motor-cop TV series in his new movie: so he could ride his own motorcycle stunts on film.

“I hadn’t seen a movie in ten years where the driving was real,” Shepard told Maxim. “It has gone to all computer-generated and I don’t particularly enjoy that. So I was just excited to do a [Smokey and the Bandit director] Hal Needham-style movie.”

Shepard was imprinted as a young fan on automotive action flicks like Smokey and the Bandit and Hooper, another Burt Reynolds vehicle in which he played a stunt man. Its opening sequence, showing Reynolds suiting up in preparation for a stunt, inspired a generation of extreme sports participants.

“The one that started it all for me is Smokey and the Bandit,” Shepard recalled. “I’ve seen that movie eleven hundred times. I love that movie,” he enthused. “I love Hooper. I didn’t like the movie, but the driving was sensational in The Dukes of Hazzard movie, great car stuff.”

Indeed, off-road chases in his 2012 action flick Hit and Run were homages to the old TV show. “Oh yeah, 100 percent,” Shepard acknowledged. “That’s when we come off the dirt road onto the pavement, Kristin and I, and pass the camera car, that was very Dukes of Hazzard.”

His motivation in shooting Hit and Run was to remind Hollywood what is possible with real-world car driving stunts. The result was a green light for CHiPs.

“My original goal, or my pitch for Hit and Run, was a Sundance [Film Festival] version of Smokey and the Bandit. That is what I was aiming for. I had no fantasy or delusion that it was going to get bought and distributed. I just thought, ‘Well, million-dollar movies just don’t get distributed.’ So the fact that that happened so exceeded my expectations for the movie.”

‘Ride or die’ doesn’t only apply to Shepard and his loved ones; it includes his vehicles, which feature prominently in his films’ action sequences. So, yeah, that’s his pride-and-joy ’67 Lincoln Continental you see hot-dogging through the dirt in a chase scene in Hit and Run. And his Tatum sand rail in the movie’s finale.

Shepard might be nuts, but fortunately, he’s not totally nuts. So, those scenes thrashing the Lincoln down a dirt road and across fields actually use a stand-in Lincoln for the truly abusive bits, Shepard admits. “Had I been willing to destroy my car, I’d have jumped it, but I just couldn’t bring myself to do that.”

Shepard’s love of his Ducati Hypermotard motorcycle led him to shape the very plot of CHiPs to accommodate its inclusion.

“Really, only the Hypermotard can do that stuff. So then I go, ‘How on earth would CHiPs end up on a Hypermotard?’ If one of the guys was an FBI agent and under cover, then the sky is the limit. So, honestly, it all started with knowing what motorcycle I wanted, so I was forced to create the story I ended up telling, to justify getting it into they movie!”

So remember when watching cockamamie plot lines in films like CHiPs, maybe there’s a reason for the improbability.

What’s next for Shepard? Well, once his media tour for CHiPs dies down, he’ll be heading to the desert to race his sand rail Easter weekend.

After that, Shepard says won’t be taking on any automotive passion projects, like Eric Bana’s Love The Beast, a documentary on the restoration of the car he used to race in Rally Tasmania as a young man, or Adam Carolla’s Winning: The Racing Life of Paul Newman.

Instead, this family man would like to settle into a routine, maybe making CHiPs sequels, or maybe rebooting another classic TV show from his youth.

“I would love a CHiPs franchise. But I would love to do [’80s action TV show] The Fall Guy. I think that would be so much fun.”

Naturally, Shepard imagines ways to top the mechanical mayhem of the original show, proposing better jumps than seen on the old show. “You know, suspension has changed so much, Colt Seavers used to jump that truck over a bush and it would bounce when it landed and never get more than seven or eight feet of air.”

No matter what project Shepard focuses on, you can be sure it will involve internal combustion and speed. And maybe he’ll get around to a passion project someday, documenting some cool aspect of motorsport. The working title will be “Ride or Die.” And there won’t be any CGI driving stunts in it.