Tribeca 2016: Jessica Biel Is a Beautiful Angel, ‘Devil and The Deep Blue Sea’ Is Just OK

This New Orleans-set drama was a true labor of love for everyone involved. 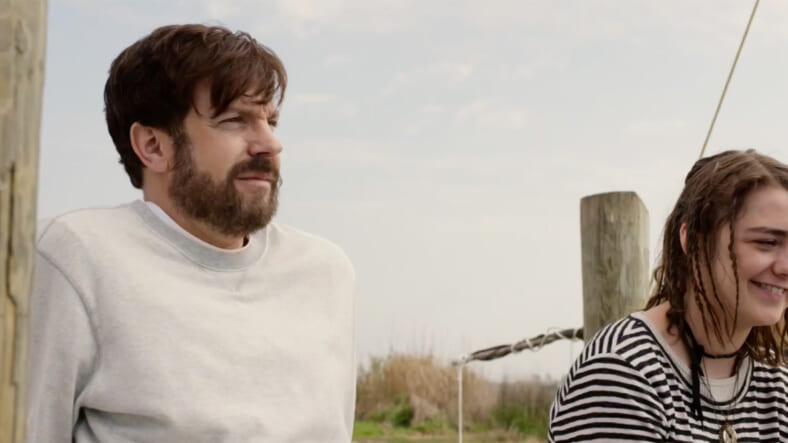 The Devil and the Deep Blue Sea, which premieres at the Tribeca Film Festival on Thursday, is not a great movie (sorry!) despite having a great cast: Maisie Williams (Game of Thrones), Jessica Biel, Jason Sudeikis, and Mary Steenbergen (Togetherness, Curb Your Enthusiasm). The indie feature, the first for director Bill Purple, was several years in the making, having encountered your typical indie-financing fits and starts, but the team behind the movie would not be swayed. And if there’s anything that can help boost goodwill for a movie a certain writer didn’t necessarily love, it’s seeing how much the actors and producers and director did love it.

That’s what happened during a roundtable interview with Biel, Sudeikis, Williams and Purple at the Tribeca Film Festival, where the movie — about a widowed architect (Sudeikis) who befriends a homeless runaway who wants to build a raft to sail across the Atlantic —  will premiere on Thursday night. Our brief chat with the folks behind the movie (Sudeikis and Biel both have a producer credit) gave us a window into the challenges of independent filmmaking and why you need talent who refuse to give up on a project. Here are some highlights:

Bill Purple on the origin story of The Devil and The Deep Blue Sea:

“I found the script on The Blacklist in 2008, and I immediately responded to it,” he said. “I brought it to Jessica and her producing partner, who also happens to be my wife Michelle … Once we decided to do this, I immediately went to Jason to play the lead role and we met and started that process. Maisie was only 10 at the time so we had to wait for her,” Purple joked, and Sudeikis jumped in: “We didn’t want to have to pay for a tutor on set.”

Jason Sudeikis on how and why he signed on:

“The initial introduction was through the script itself and the letter from [Jessica.] That was June 2009. I remember very well being in a hotel in LA for a different, short gig, and I would say it was a gig that was primarily there to help pay the bills,” he said. “And then this marvel showed up. The initial [reaction] was crying a couple of times when I read the script because of the story and what Henry [his character] was going through and then empathizing with that. And then it was flattery — wow, why would they think of me this way.

Sudeikis and Purple met to discuss the project, and Purple told Sudeikis “I’ll call you when we have some money … and then it was eight years later.”

“Expectations can breed contempt,” Sudeikis said. “If I had expectations of when [the movie] was going to happen and who it was going to happen with and for how much money and how many days … you get used to [expecting] that anything can happen at any moment, and you gotta just ride the horse in the direction it is facing.”

During the in-between years, Sudeikis fell in love with Olivia Wilde, and they had a baby together.

Biel talked about how she felt the seat-of-the pants production actually helped the creative side of the movie.

According to Purple, Timberlake offhandedly expressing interest in scoring The Devil and The Deep Blue Sea years before the movie came to fruition. “Then we circled back and said, so we’re making this movie…”

“… ‘Were you really serious about that’,” Biel said. And he was. And the score is really quite good.

Biel on playing a dead character in most of the movie (which has a lot of flashbacks.)

Maisie Williams on being a very young person playing a character who has seen a lot of suffering:

“I feel like a lot of people assume if you are a lot younger then you haven’t had big life experiences, which is true for the most part, because no one would wish [a lot of trauma] for a child,” Williams said. “But I like to think that I’ve been through enough to portray a lot of the issue she had in her life. There’s always things that you can draw on. Everyone’s been really mad or really sad. And whether it was about something ridiculous or not, you’ve felt that emotion.”

‘The Devil and The Deep Blue Sea’De premieres at the Tribeca Film Festival on April 14 at 6 p.m.