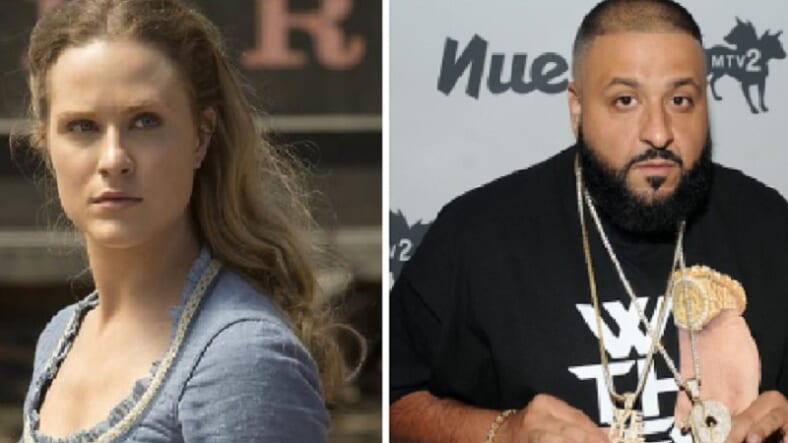 DJ Khaled stepped in it. It doesn’t matter that the interview in which he expressed some very unpopular opinions about what he expects in a relationship happened in 2015.

People are mad as hell today, including other celebs—like Evan Rachel Wood.

Wood, who is openly bisexual, probably tweeted one of the best responses to Khaled’s past statements regarding his unbalanced attitude toward performing oral sex on his girlfriend or wife (he won’t) and his partner giving it to him (it’s her obligation).

Via People, here is Khaled’s money quote, for what it’s worth:”You gotta understand, I’m the don. I’m the king … It’s different rules for men. We the king so there’s some things y’all might not wanna do, [but] it gotta get done. I just can’t do what you want me to do. I just can’t.”

Whoa. As you can imagine, that was the definition of ‘oh, he really went there.’ He wasn’t quite as famous at the time—though still pretty famous—so maybe no one really noticed. But they noticed this tweet with the proof.

ok so I'm convinced he has the mind of a teenage boy pic.twitter.com/epzhPjceny

It’s an antiquated attitude at best. But social media users had some serious opinions about it—and plenty of jokes. Many of the sharpest words came from women, but a few guys had funny takes on it too. See below.

In his defense, @djkhaled is a spokesman for Weight Watchers and pussy is like 7 points per serving…

Dear DJ Khaled’s wife, hit me up when you get tired of this shit. https://t.co/QIWFfuF25Q

Hey @djkhaled — you opened your mouth for a couple minutes & now the whole world is coming for you.

“Sir please just pull forward and get your food”

Smash Mouth just weighed in on DJ Khaled’s oral sex preferences. I want to jump off the planet: pic.twitter.com/wa7eMChaKR

DJ Khaled’s public profile has been positive. He just comes across as a friendly bear of a man, and he seems happy with that. This is a weird way to put a dent in that; it’s the opposite of staying relevant.

Khaled really should have checked in with Uncle Junior from The Sopranos before saying what he said. Tony rags on Junior about his supposed skills in the video below.

If one of the mobbed-up guys from the HBO show was that skilled and fine with hunting for the little man in the pink canoe, seems like it might make another guy bent on proving his toughness by abstaining think twice about his life.