This week, our dogs take on the latest fantasy juggernaut. 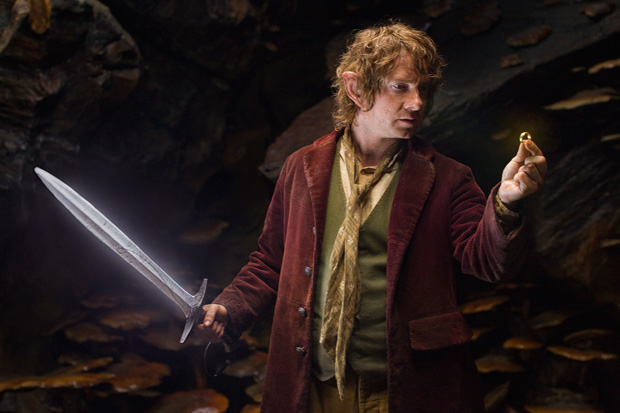 This week, our dogs take on the latest fantasy juggernaut. The Hobbit
Out December 14, Rated PG-13

Photo Courtesy of Warner Bros. Pictures
Holly’s take:
“Fuck me, this movie was long! And I mean, loo-ooo-ooong. Considering they’re already taking a single book and turning it into three films, shouldn’t they each clock in at something under two and a half hours? The first hour definitely drags, and isn’t helped by the fact that there are two dwarf songs thrown in there, one of which occurs during a dinner party scene that would feel more at home in an old-school Disney cartoon. Once you’re over this barrier, though, shit goes cray-cray. The last 90 minutes consist of one gigantic action scene after another: Battles on windswept moors with monstrous wolves; battles in underground caverns with cackling goblins; battles on fire-ravaged cliff tops with bloodthirsty ogres; battles on perilous mountain passes with giant rock-creatures. It’s battle after battle after battle, and each one of them is fucking sensational. Honestly, it may be overly lengthy, but you really get your money’s worth in terms of spectacle. By the time the movie ended I was so riled up from all the constant action that I had to go outside and bite the face off a badger. And if that’s not a recommendation, I don’t know what is!”

Photo Courtesy of Warner Bros. Pictures
Dexter’s take:
“This is a very fun movie. I wasn’t nearly as perturbed as Holly by the first hour – rather, I found it to be a warm, fun, relatively economical introduction to the dozen dwarfish companions  – and the second half of the flick is just jammed with set piece after set piece. Overall, it’s definitely a much wackier affair than the Lord Of the Rings trilogy, which works fine for me – the one thing I could never take seriously about those films was how painfully seriously they took themselves. I’m sorry, but once you’ve got wizards and elven princesses and hobbits on the screen, no amount of carefully constructed character arcs and painstaking background detail is going to make me treat it as anything more than a fun, silly romp through magic-land, which is exactly what The Hobbit is.
One major issue I have with the film is the format in which I saw it: IMAX 3D. With the infamous new frame rate added to that mix, there were far too many times when the action onscreen became an indistinct, double-vision blur. My eyes actually ached for a while during the first half before finding a way to adjust, so my advice is to see it in either 3D or IMAX, but not both. Overall, though, this is a solid, entertaining, and thoroughly action-packed movie, stuffed with more imaginative and wacky things than my own rectum when I accidentally fall asleep in the back of the car with my owner’s three small children. God, I hate children.”

Photo Courtesy of Warner Bros. Pictures
Billie’s take:
“I COULDN’T TELL THE DIFFERENCE BETWEEN THE ORCS, THE GOBLINS, AND THE TROLLS – THEY ALL JUST LOOKED LIKE HOWIE MANDEL TRYING TO DO AN ANGRY POOP. I LIKED IT!”Last Week’s Movies Rated by DogsThe Doggone Girls of Pit Bulls and Parolees